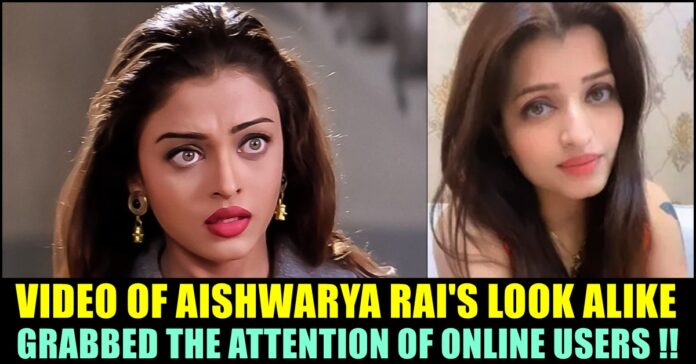 After Manasi Naik and Mahlagha Jaberi, who shot to fame with their looks which is similar to Aishwarya Rai, Amrutha whose Instagram name reads as Ammuz Amrutha, shot to fame in a very shot period with her looks. The former Tik tok star who enjoyed a huge following in the now-banned app, often recreated Aishwarya Rai’s iconic scenes, mostly from her South Indian films and impress the Internet users. She enjoyed 1.2 million followers in Tik Tok platform which got banned by the Indian government.

Now, Ashita has joined the trend and her features resembles the famous actress so much. Check out some of the recent videos below :

Comment section of the emerging celebrity’s posts are filled with netizens expressing their admiration towards the similarities between the actress and the online user. Currently, Ashita is enjoying 250k plus followers and is the number is expected to increase in the coming days.

In the meantime, actress Aishwarya Rai is all set the make her silver screen come back through Mani Rathnam’s most anticipated “Ponniyin Selvan” movie. Aishwarya Rai is going to play dual roles in the film and it marks her fourth collaboration with ace filmmaker Manirathnam. In tamil, she was last seen in Superstar Rajinikanth’s 2.0.

Previous articlePugazh Got Married For The Second Time ??
Next article“Cobra” Director Responds To Negative Comments !!

Heart wrenching video of a Kabaddi player succumbing to death during his ride has left the people of the surrounding devastated. The video shows...