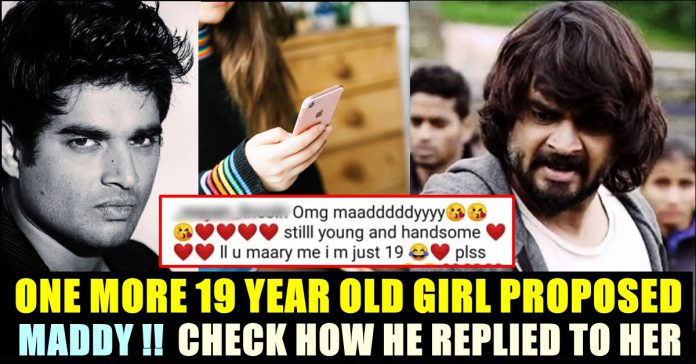 One More 19 Year Old Girl Requested Maddy To Marry Her !! Check His Reaction

The sun might stop raising in the morning but Maddy never stopped impressing his female fans. The actor who is winning their hearts since 2000, is 49 year old now but still continues to make ladies propose him with his cool looks and super cool Instagram posts. In Tamil, Madhavan was last seen in Vikram Vedha along with Vijay sethupathi and impressed fans with his role in Irudhi Suttru before that. The actor is now super active in social media platforms such as Twitter and Instagram.

Now, the actor who met a grammy award winning lyricist, expressed his love towards him in one of his Instagram post. Maddy wrote “When you fall in love with a country song 30 years ago and finally meet the legendary Grammy Award winning lyric writer in Nashville at Jonny Cash’s farmhouse. Unreal and surreal ..forever and ever Amen…So very lovely meeting you Paul and so looking forward to the next time ..”

When you fall in love with a country song 30 years ago and finally meet the legendary Grammy Award winning lyric writer in Nashville at Jonny Cash’s farmhouse. Unreal and surreal ..forever and ever Amen…So very lovely meeting you Paul and so looking forward to the next time .. @pauloverstreet .. @pauloverstreetmusic #rocketrythefilm #Rocketryfilm @vijaymoolan

To our surprise, a 19 year old Instagram user who is a girl, found the actor very much attractive and immediately proposed him and requested him to marry her. The girl wrote “Omg maadddddyyyy😘😘😘❤️❤️❤️❤️ stilll young and handsome ❤️❤️❤️ ll u maary me i m just 19 😂❤️ plss atleast say luv u thats enough😂😂❤️❤️❤️❤️❤️❤️❤️❤️🔥🔥🔥”

Maddy who saw this comment from Reayan lincoln, replied in a most unexpected way. He laughed at the comment of the user and asked “again????”

Reason behind Maddy questioning this way is nothing but a similar comment which surfaced in his post few months back. In a selfie post which was uploaded by Maddy on 23rd of July, 2019, an 18 year old girl asked Maddy if it is wrong if she wishes to get married to Maddy. Check out that old post of the actor below :

Editing is so much fun and exhausting:. Enjoying and fearing it..End of long travel day. Definitely getting older .. 🤣🤣🚀🚀🙏🙏#rocketrythefilm #actormaddy #Rocketryfilm

To her, Maddy replied by saying that she will get a guy who is more worthier than himself. (Also Read : 18 Year Old Girl Proposed Maddy In Instagram !! Check His Reply !!)

This reply of the actor went viral at that time as the actor still couldn’t forget it which is evident through his recent reply to a similar proposal of a teenage girl. Comment your views !!

Previous articleA.R Rahman Got Frustrated For The First Time On Air !! WATCH
Next articleFan Criticized Mafia After Watching It !! Prasanna Reacted

A viral video that shows a young air hostess involving in a heated argument with one of the passengers of Indigo airlines inside a...