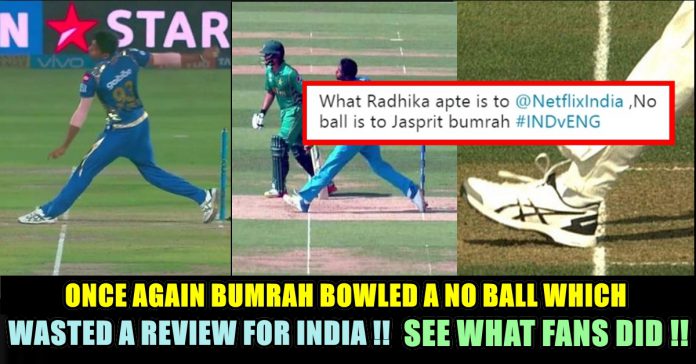 India pacer Jasprit Bumrah, playing his second game of the Test series against England in Southampton, was back with his known evil on Day 1 – a no ball at a critical time. The bowler’s overstepping denied the visitors a key wicket in the form of England captain Joe Root in the fourth Test. Bumrah, however, was the first Indian bowler to strike by picking up the wicket of opener Keaton Jennings after Root won the toss and elected to bat first. Bumrah’s yet another no ball did not impress the Twitterati with even the generally lenient cricket pundit Harsha Bhogle expressing his displeasure on the social media platform. It happened in the third ball of the fifth over when the bowler rapped English skipper Root’s pads and India went for an appeal. Umpire Bruce Oxenford shook his head at which captain Virat Kohli went sought a review. It was seen in the review that the bowler had failed to bowl a legal delivery by overstepping. The decision would have gone in India’s favour had it been a legal delivery since there was no bat involved and the ball was straight on its way to crash into the stumps. But it was Bumrah luck for India. India’s frustration did not last long though as another Bumrah’s opening partner Ishant Sharma cut short Root’s stay at the wicket by trapping him before the wickets for just four. England were reduced to 15 for 2 with opener Alastair Cook and Jonny Bairstow, who is not playing this match as a wicketkeeper but only batsman because of the injury he received at Trent Bridge, accompanying him.

Though Root was gone giving some relief to Bumrah, yet the bowler was not spared by the Twitter users for his repeated offence of bowling no balls on the international stage. The right-arm pacer made an impressive return to the Test side by picking up five wickets in the second innings of the Trent Bridge Test but his no ball here early on Day 1 proves that he is yet to put the curse of his bowling back.

Jasprit Bumrah is a fine cricketer, and in the middle of an excellent spell, but he is letting himself and his team down too often with these no-balls.

If umpire had given that out, Root might not have reviewed this…it was that plumb. #EngvInd #Root #Bumrah

What Radhika apte is to @NetflixIndia ,No ball is to Jasprit bumrah #INDvENG

After everything that it has cost India, it’s a SHAME that Jasprit Bumrah is still getting wickets off a no ball. This could potentially cost them the series. What is the coaching staff doing ? This should’ve been sorted by now #ENGvIND

Jasprit Bumrah again and again how many times will be repeat the same mistake, why can’t he bowl without a no ball playing in international game and bowling no ball regularly is a crime

With this frequency of bowling No-balls, at the end of his career Jasprit Bumrah will have more no ball wickets than @sachin_rt has got out in 90s scores. @Jaspritbumrah93 #ENGvIND

Jasprit Bumrah and No Balls, The Untold story.😪🤧😏🤦🏻‍♂️

Jasprit Bumrah and his no balls always cost India match, he and coaching staff needs to work on this #ENGvIND #EngvInd

Only thing that can compete with Virat Kohli’s consistency is Jasprit Bumrah’s wickets on No Balls! #ENGvIND

Pretty sure Jasprit Bumrah has taken more wickets than James Anderson just off the ones he’s had on no balls. #IndvsEng

Making fun of Jasprit Bumrah( NO BALLS ) love is NOT funny.#ENGvIND #ENDvIND

Shocking that the issue has not been sorted out yet…is anybody taking the issue seriously? Has already costed us t20 world cup and Champion’s Trophy…

Bumrah’s no ball cost us the champions trophy.

Now i feel what jaipur police did was correct.

Tamil Nadu BJP leader S. VE. Shekher Venkataraman, an actor and playwright, has provoked anger by sharing on Facebook a post that disparages the...