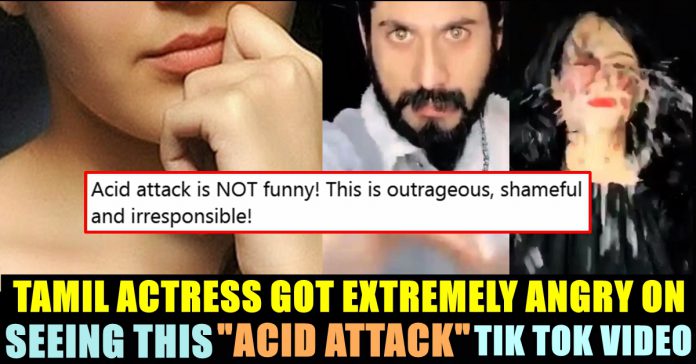 Faizal Siddiqui, a popular Tik Toker’s account got suspended by Tik Tok India for glorifying acid attacks on women. The video received severe backlash from the Internet users as it reached several million views and likes from his followers. After removing the video, Tik Tok’s spokesperson said “We stand committed to extending our support to law enforcement agencies for any further action” to media outlets.

Despite of the removal, the people of other social media platforms are expressing their displeasure against the video. Many people seeked action against the app for not policing the content better. Chairperson of National commission for women in India, Rekha Sharma, demanded a permanent ban against the app. “It is not only the objectionable videos but it also pushing the youngsters towards unproductive life where they are living only for few likes and even dying if the likes gets decreased” Rekha said.

Watch the controversial Tik Tok video that got removed from the Tik Tok platform :

He is Faizal Siddiqui, memeber of team nawab and brother of Amir Siddiqui

Is he promoting Acid attack on girls??

FYI he has 13.4M followers on Tiktok

What kind of Social media influencing is this? pic.twitter.com/h83VQbSvv5

“As per policy, we do not allow content that risks safety of others, promotes physical harm or violence against women.” The spokesperson of Tik Tok said according to reports. “The behaviour in question violates our guidelines and removed the video, suspended the account and waiting for law enforcement to take action. ” he added. Regarding the other videos which promoted violence, Tik Tok said “Videos violating our policies of imagery depicting animal abuse and contents that promotes non-sexual adult videos have been taken down. Along with many online users, actress Raashi Khanna who is known for pairing up with Atharvaa and Vijay Sethupathi in Tamil films, posted a comment slamming the predator. “Acid attack is NOT funny! This is outrageous, shameful and irresponsible!” Raashi Kanna wrote in her tweet to express her anger towards Faizal who made than video :

Acid attack is NOT funny! This is outrageous, shameful and irresponsible! https://t.co/ZlEioPhDGJ

Along with Raashi, Hundreds of people condemned the video of Faizal through their tweets.

Acid attack is being proudly promoted on TikTok. What can be more shameful ? This guy Faizal Siddiqui should be arrested immediately. Imagine their mentality when they don’t hesitate to post this nonsense on social media. #BanTikTok pic.twitter.com/CiOFvS71N3

#BanTikToklnlndia
I really want to talk on it ..that if we are mentioning #FaizalSiddiqui thn what about that girl who is also in that video. Blame on her too. There should be proper judgement 😈😈 pic.twitter.com/HaWQTDaZoq

As a result of an argument between a popular tik toker Carry minati and Amir Siddiqui, a brother of Faizal Siddiqui, resulted in Tiktok’s ratings in Google app store reducing drastically. Indian social media users brought down the rating of the app from 4.6 to 1.3 in Google play store to express their anger towards the short video posting app.

During July month of 2020, BJP party appointed actress Namitha as one of the state executive members. She had joined the party in the...