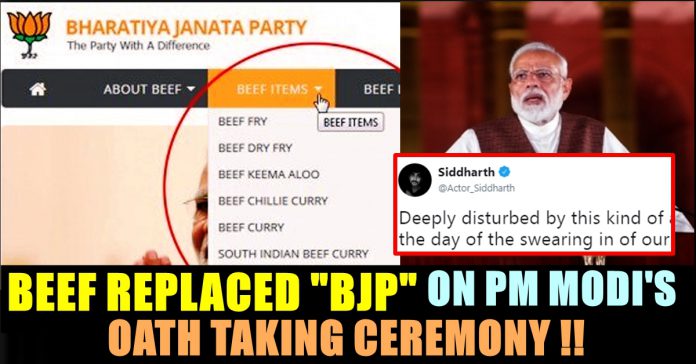 The website of the BJP’s Delhi unit was hacked on Thursday and photos of beef dishes posted on it. “Shadow V1P3R” claimed credit for hacking the site, replacing details of the party’s leadership, history, and constitution with the beef menu.

The hacking attack took place while the Narendra Modi government is taking oath to office in Rasghtrapati Bhavan in New Delhi. “We have taken cognizance of the matter. The site has been brought down for taking corrective measures. “We will get down to the bottom of it and ascertain how it happened and who all are responsible for the hacking,” Delhi BJP IT cell incharge Pratyush Kant said.

This matter grabbed the attention of netizens who reacted to it with their respective perspectives. Actor Siddharth who is very well known for his comments against BJP in his twitter account wrote “Deeply disturbed by this kind of activity on the day of the swearing in of our benevolent leader @narendramodi ji for a second term. #Beef is personal. It should not be made public like this.”

Deeply disturbed by this kind of activity on the day of the swearing in of our benevolent leader @narendramodi ji for a second term. #Beef is personal. It should not be made public like this. pic.twitter.com/CsSCq93ar2

Check out some of others reactions :

Your website has been hacked. How long will you take to restore the site this time?

While they were cavorting in the forecourt of Rashtrapati Bhawan, someone hacked the BJP website with beef recipes… 😂 pic.twitter.com/GYySqDQasK

Dinner tonight is BEEF . Host is none other than our BJP . Wonder how many days this restaurant will continue to serve yummy recipes. Lost count on number of times BJP website is hacked . pic.twitter.com/kLXBtopNsL

However, rest of the content on the homepage remained untouched. The website was restored after some time.

After Independence, the constituent assembly adopted two names, India and Bharat for the country. Many members wanted "Bharat" to be the primary name. A...