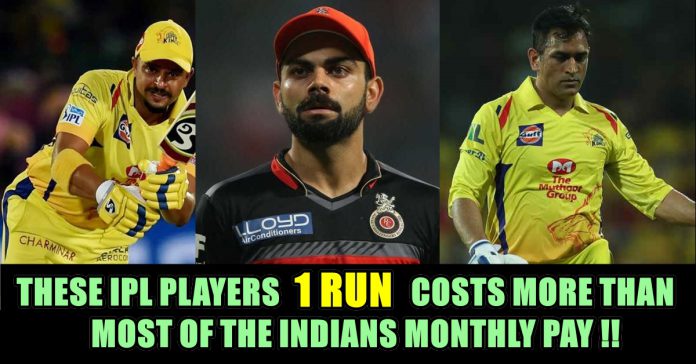 OMG : These IPL Players Earned This Much For Every Run They Scored !!

The IPL 2018 is near to its end with Chennai Super Kings (CSK) being the first finalist and soon we will get to know which team will face CSK in the finals that will take place on May 27.

Like every year, some players performed in an exemplary manner while several other cricketers who were bought by the franchise at sky-rocketed price failed to justify the faith bestowed on them.

Cricket is not just about batting; it is also about fielding and bowling and some all-rounders tried to compensate their failure in batting with their good performance in bowling. However, still the batting is considered as the most important aspect and we have calculated the value of one run scored by some cricketers by dividing their auction amount by the total runs scored by them in the tournament. Note : We know that this is not the correct way of calculating the worth of a player but we did it just to expose how well the players compensated the money they got paid in this IPL season !! We didn’t consider bowling and fielding efforts while calculating this figure.
Source : RVCJ
Previous articleThe Reason Vijay Sethupathi States For Acting In Rajinikanth’s Film Is Just Unbelievable !!
Next articleSHOCKING : India-Srilanka Test Match In July 2017 Was Fixing ?? : Video Leaked !!

Television actress Sameera Sheriff replied to a follower who misunderstood that she was eating meat that was made of a cow in her youtube...

As an unexpected twist in the tale, reports emerged saying that Youtuber Madan's wife Krithika got arrested by the Police officials. It has been...