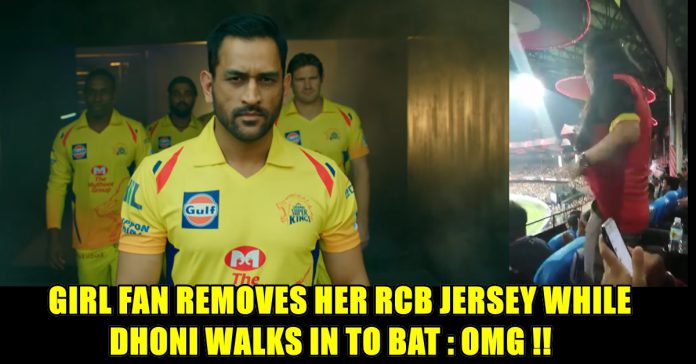 OMG : RCB Fan Girl Removed Her RCB Jersey In The Stadium Itself When Dhoni Walked In To Bat !!

MS Dhoni is touted as one of the greatest cricketers of all time and it’d be fair to say that he has the best fan base after Sachin Tendulkar in India. As a captain, as a batsman and as a wonderful keeper, his contributions to the gentleman’s game have been priceless and it is barely surprising to see him getting this kind of love these days.

The fans are aware of a fact that Dhoni is nearing the end of his career and we’d see him for another 2 years maximum. Maybe that’s one reason he’s getting some resounding ovations when he is walking out to bat these days, reminiscing us of the days when people would go bonkers watching Sachin Tendulkar coming out to bat. No matter which club an individual supports, most of them have a soft-corner for the Chennai Super kings considering MS Dhoni is their leader. We often see fans changing loyalties watching Dhoni come out to bat and a similar incident occurred at the Chinnaswamy Stadium when a fan girl switched her jersey watching the 36-year-old coming out to bat.

Whilst the chips were down for the Super Kings with the target seeming a country mile away,  the former Indian captain played one of the best knocks in his IPL career to steer his side to a famous win. MS Dhoni finished things in style with a brilliant 70 off 34 balls and remained unbeaten. He received great support along with Ambati Rayudu as the duo stitched a 101 run partnership for the 5th wicket to save CSK’s day. Dhoni hit a six off the second ball he faced and announced the intentions with which he arrived. He kept continuing the momentum and in a span of few overs, the pressure was back on RCB from Chennai. The bowlers started leaking runs thanks to his power-hitting and although the RCB fans were utterly disappointed, everyone enjoyed Dhoni smacking the ball so nicely.

This video of a fangirl changing her jersey as Dhoni walked out to bat will explain the kind of fan base this legend enjoys. Previous articlePrithi Ashwin Praised Dhoni’s Knock Against KX1P But Her Opinion For RCB’s Match Differed From The Past. Check What’s Up !!
Next articleKXIP’s KL Rahul Trolls RCB With “EE SALA CUP NAMDE”.. Here’s What You Should Not Miss Watching !!

Uploading a couple of screenshots from the recently released "Valimai", fans of Tamil cinema, especially fans of actor Ajith condemned the makers of "Valimai"...