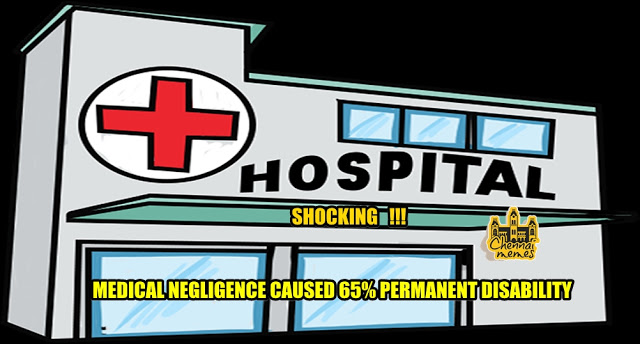 Anuradha, a resident of Pattalam, was admitted at NR Medical Home Pvt Ltd on Barracks Road in Perambur was admitted on January 9, 2005 for delivery and gave birth to the boy the next day and her son was initially treated by a nursing staff and later referred to a paediatrician.

The hospital director Dr Nasreen Ahmed attended to her during delivery. At birth doctors saw thick meconium stained liquor a dark green liquid containing mucus, bile and epithelial cells normally passed by the newborn in the child’s mouth. The umbilical cord was also wound around the baby’s neck. While the doctor removed the umbilical cord, a staff nurse removed the liquid from the baby’s mouth using a bulb suction. The child was referred to a paediatrician after the doctor noticed respiratory distress.

Following a complaint by Anuradha,The Chennai north district consumer disputes redressal forum bench found a series of deficiencies in the hospital where the boy did not receive adequate oxygen or vital drugs like vitamin K injection that could have prevented mental retardation.

The mental retardation certificate board has certified 65% permanent disability in the boy in 2012 and the court ordered the hospital to pay 5 lakh as compensation. In addition, the hospital has to bear the legal and medical expenses of 58,000.