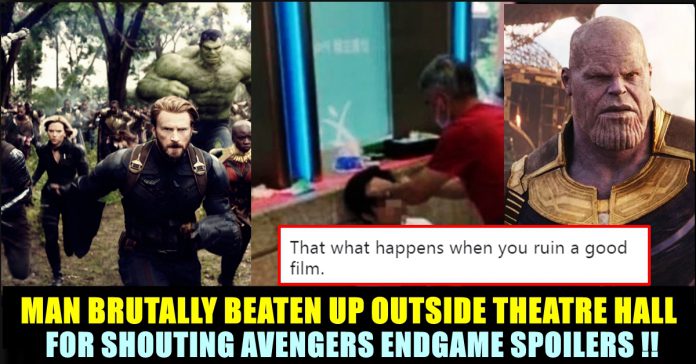 Endgame released to packed audiences in movie theaters across the world, fans who are still to watch the film are doing their best to avoid the many spoilers on the internet and social media. In fact, impassioned fans have made it a point to call out anyone who posts a spoiler on and offline, putting up boards and signage to proclaim certain areas as ‘spoiler-free zone”.

In fact, Russo Brothers, the directors of the film, even wrote an emotional open letter to fans, requesting them to not spill spoilers and let fans enjoy the film in peace. The stakes are simply too high with endgame, the finale in Marvel’s eleven-years-long Avengers franchise.

A man in Hong Kong learned that the hard way when, according to Taiwanese media, he began loudly revealing plot details outside a movie theater just after seeing the highly anticipated superhero drama. A photo of the incident has circulated on social media, showing him sitting on the ground after his apparent confrontation. Citing Taiwanese media reports, the online news site Asia One alleged that a crowd beat up a young man yelling Avengers spoilers outside a theater in Hong Kong Friday night.

The story’s already gone viral, although it’s by no means been confirmed. The only evidence backing up the tale of vengeful Avengers fans is a single photo, reportedly posted on Hong Kong social media. The image depicts a man sitting against a wall, being tended to by onlookers. Not exactly concrete proof.

Though the guy was beaten up so badly, he didn’t get any sympathy from the Internet where they thought that he deserved it :

Well, he deserved it: Man beaten up outside cinema for leaking Avengers: Endgame spoilers https://t.co/umGLQVtWr5 pic.twitter.com/COSAoJQOdt

Some guy in Hong Kong decided to shout Endgame spoilers outside the cinema and people rushed and beat him. That’s what some of you deserve

#DontSpoilTheEndgame This is a movie experience and taking away that experience from people who have invested in this 11 year and 22 film journey is theft. (This person wasn’t beaten that badly….his t-shirt is still white without any blood stains) https://t.co/NNv7pqG7Et

If you spoil #AvengersEndame #AvengersEndGamespoilers you best pre-alert an ambulance to your location.

That what happens when you ruin a good film.https://t.co/NypSOh063D

This is indeed not a way to stop people from spreading such spoilers but do you think it is that necessary to create such stunt after watching the movie ?? Comment your views below !!

Previous articleAge Of Sexual Consent Reduced To 16 For Girls !! This Young Kollywood Actor Reacts !!
Next articleThis Kollywood Director Trolled Himself To Make Fun Of RCB !! HILARIOUS !!

Among the genuine request from the Twitter users to Sonu Sood, there are few miscreants being active only to get attention which results in...

Chief Minister’s Reply To A Citizen In Emergency !!

The 21 days of lockdown is likely to extend and there is no official word on it yet in state Tamilnadu. The number of...