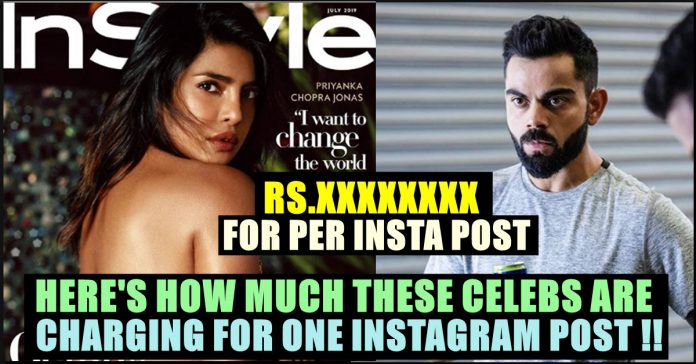 Indian celebrities are very much active on social media platforms to let their fans know about the updates of their daily routine. Starting from Rajinikanth to small time character artists, everyone having their own account in social media. This made fans of them to create an account of their own to know about their favourite celebrities instantly.

In a way of taking it to the next level, nowadays celebrities started to promote products in their respective social media accounts and they getting a whole lot of money to do it.  Now, if you have ever wondered how much the stars get paid for a sponsored update on Instagram, the answer is billions per post. According to scheduling tool Hopper HQ’s Instagram Rich List, sports stars earn the most for sponsored posts on the Facebook-owned platform, with football legend Cristiano Ronaldo is also in the list. The Portuguese goal machine, who has 176 million followers on Instagram, reportedly mints Rs 6,73,49,082 per sponsored post.

Going by the report of Economic times, Indian skipper Virat Kohli also made it to the list at number 23. The 30-year-old charges a whopping Rs 1,35,66,749 for a single post on the app. Kohli, who boasts of 36 million followers on Instagram, is also the number one ranked batsman in Test and ODI format. Recently, he led the Indian squad to semi-finals of ICC World Cup.

With 43.3 million followers on Instagram, Priyanka occupies the 19th spot on the list as she earns $271,000 or Rs 1.86 crore from every promotional post on her account. Priyanka Chopra and Virat Kohli has paid partnerships with several brands including skincare, shoes, stationery and other stuff.

Check out some of their promotional posts here :

Under the Tuscan ☀️ #teampixel 📷: @nickjonas

Here’s my #SignatureMove! Think you can do better than this? Then join the #BFFChallenge and stand a chance to meet me. 😎 Here’s what you have to do: – Follow @one8select – Put your formal shoes on and post your video showing your signature dance move. – Use #BFFChallenge, #one8Select and nominate your friends to do this! Now that you’ve seen my moves, I nominate @abdevilliers17 and @shreyas41 for the #BFFChallenge. Let’s see what you guys got! 🕺

Loved the gold & white combination on the pitch? @pumaindia has another cricket shoe for you inspired by my one8 Gold Spike Collector’s Edition. 💥 It’s definitely got my 👍. #one8 #CWC19

As far as the Instagram Rich List is concerned, Kylie Jenner is on the first spot. She has 141 million followers and earns $1,266,000 or Rs 8.7 crore from every promotional post.  Ariana Grande, Cristiano Ronaldo, Kim Kardashian, Selena Gomez and Dwayne Johnson are the other celebrities who are on the list behind her.

“Taken Away From Us Too Soon” – Meena’s Heartfelt Words On Her Husband’s Demise !!

Days after the demise of her husband Vidyasagar, actress Meena came up with an emotional post in her official Instagram handle, expressing her gratitude...

Director Vignesh Shivan who is about to direct actor Ajith kumar in his next film, is getting trolled by a number of online users...

“Vadivelu Is The Most Original Actor”- National Award Winning Director !!

This Popular Vintage Actress Is All Set To Join BJP !! Check Out The Reactions !!

Actor Isha Koppikar on Sunday joined Bharatiya Janata Party (BJP) in the presence of Union Transport Minister Nitin Gadkari in Mumbai. She has been...