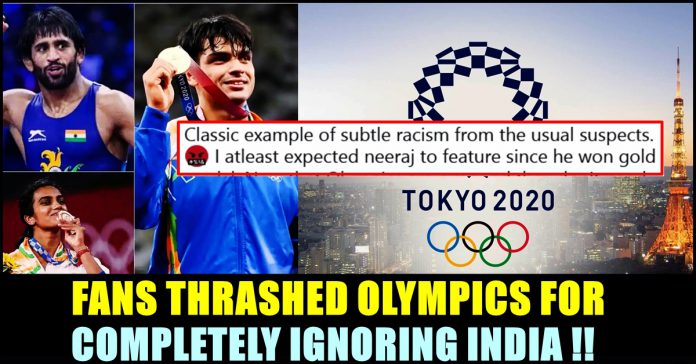 After the conclusion of Tokyo Olympics 2020 event, the official twitter handle of Olympics which enjoys 6.5 million followers, came up with a compilation video which showed the emotions of the athletes. The video lasted 4 long minutes and 11 seconds and the video was uploaded with a caption saying “The most emotional moments at #Tokyo2020 ! Stronger Together”. Despite of ending the event in a most successful manner than ever before, not even a single glimpse of any of the Indian athletes took place in the video which left the fans of India in a dejected state. Many raised voice questioning why some of the most emotional moments of Indian athletes were not included in the video with others accusing the management of Olympics as racists.

Comparing the past, this was India’s best ever Olympics tournament as far as the success rate is concerned. The country ended at the 48th position but fans of country India didn’t complain as they witnessed the effort invested by the sports personalities of our country. India won 1 Gold, 2 Silver, 4 Bronze in the entire tournament which made us not only proud but emotional as well.

When the committee of Olympics decided to make a video out of the emotional moment of the sports personalities who participated in Tokyo Olympics 2020, they completely ignored the players of India which left fans of the country in a dejected state. They lost nerves on seeing some of the players featuring in the video twice and worried on the fact that the creative team didn’t find a single video of an Indian player to add in the long video.

It is notable that Neeraj Chopra won first ever Gold medal for the country in the history of Olympics in athletes and Indian men’s hockey team broke the 41 year old jinx by winning Bronze medal. PV Sindhu, Mirabai Chanu, Ravi Kumar Dahiya, Lovlina Borgohain and Bajrang Punia of India went through quite an intense situations during the tournament as well. However, the management of Olympics decided not to add any video of Indian sports personalities.

The most emotional moments at #Tokyo2020 !#StrongerTogether pic.twitter.com/tuSJb6JfAF

“At the time of likes and view you were tweeting and even replying in hindi but here you haven’t included even a single snap of our athletes…. Okk okk no problm……” a fan wrote to express his dejection whereas another one said “Classic example of subtle racism from the usual suspects. I atleast expected neeraj to feature since he won gold medal. Now that Olympics are over and they don’t need Indian viewership they are back to their level.”

That's what we have to learn, don't be so emotional with a little bit of response towards us 🥱!! All have been using our audience since years because it's easy to attract Indians.. Now, event is over, nothing left for us 🙌
All about business you know!

Sorry to say but u have missed my champions. Where is @Pvsindhu1 @Neeraj_chopra1 #IndianHockeyTeam @mirabai_chanu and others?

You @Olympics must change

caption should be "some random emotional moments….#stronger parted

Or your tagline as " Olympics- discouraging people through Olympic values of animosity , disfavour & excellence(hypocrisy)..

But @WeAreTeamIndia will make you regret for the same..

Wowwwww didn't saw a single emotional moment from #TeamIndia journey in #Tokyo2020 int this clip. Such ignorance where this was #TeamIndia 's most successful tours in #Olympics history.
Not good @Olympics team 👎👎👎👎

Classic example of subtle racism from the usual suspects. 🤬 I atleast expected neeraj to feature since he won gold medal. Now that Olympics are over and they don't need Indian viewership they are back to thier level. 🤬

Previous articleH.Raja & Other BJP Politicians Trolled PTR’s Tamil !!
Next articleA.R Rahman’s Reply To A Fan Who Wanted Him To Act In Films Wins Internet !!

Vishnu Directly Slammed This Award Function For Not Considering “RATCHASAN” !!

Vishnu Vishal is one of a very few emerging actors who loves to experiment himself in films. He is the protagonist of the first...

In a first of its kind of crime, A 26 year old woman named Sandhiya caught marrying for the 7th time in her lifetime...

“How Well You Speak Sir !!!” – Video Of Vikram Expressing His Admiration Towards Kamal Is Trending

Oththa Seruppu Size 7 directed by Radhakrishnan Parthiban is winning several awards since its release. Parthiban is one of the most experimental filmmakers of...