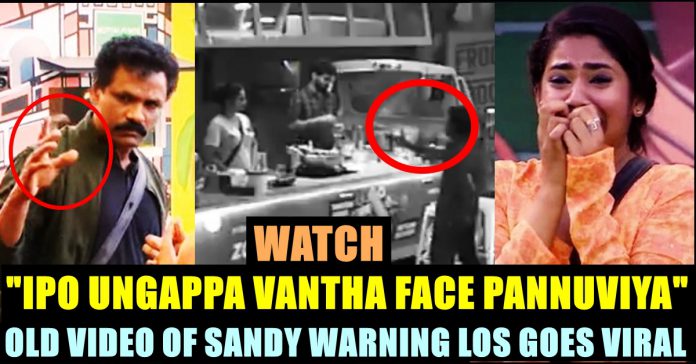 Cheran, who treats Losliya as daughter, from the initial episodes warned them not to fall for each other and advised them to discuss about the relationship after getting out of the house. However they kept romancing and their unnamed relationship continued to an extent they faced the wrath of Bigg Boss for removing their microphone battery in midnight in order to talk something personally.

Today, the last two promos suggested about the arrival of Losliya’s father. Losliya’s father has entered the house to visit his daughter after so many years. In the first promo Losliya was seen crying her heart out as she saw him after many days. His father who looked dejected doesn’t seemed very much excited.

Further he asked “Did I raise you in this way ?? What did you tell me before coming here ?? I don’t want you to talk to me.” to Losliya. He was also seen consoled by Cheran. Losliya was seen shedding tears.

To this warning of Sandy Losliya simply replies to him by saying that she won’t talk with Kavin from the next day. Check out the promo that got released today here :

Many expected that Kavin would no longer take part in the game show since the news of his mother’s sentence surfaced. However, he continued to take part in the show and it was said that he was not informed about the sentence of his family members. We have to wait and see the real reason behind Losliya father’s anger.

What do you think on this prediction of Sandy ?? Comment your views below !!

Previous articleYou Must Pay This Much As Fine If You Wear “Chappel” While Driving Bike !! SHOCKING REPORT !!
Next article“Will You Do Mother Role If Offered??” Asked Fan !! Check Poonam Bajwa’s Savage Reply !!