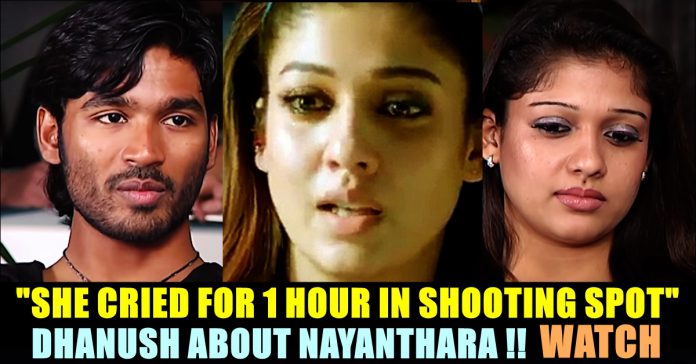 Nayanthara and Dhanush are two of the prominent actors of Kollywood industry right now. The “Asuran” actor who is a national award winner is currently concentrating on both commercial entertainers and critically acclaimed films. Being one of the very few actors with huge fanbase, Dhanush also started producing movies since Velai Illa Pattathari. On the other hand, Nayanthara gained the tag “Lady Superstar” with her hard work and dedication. Now the official youtube channel of Sun TV has released an interview of the actors together during the release of their film “Yaaradee Nee Mohini”.

In the interview, Dhanush and Nayanthara looked so young, most probably in their mid 20’s. Vijay TV fame Erode Mahesh hosted the show which might most probably be telecasted as a special interview for the Pongal festival of 2008. Both the actors were seen donning black outfits and shared many incidents that took place between them personally and professionally.

In the promotional interview of “Yaaradi nee Mohini”, Dhanush and Nayanthara looked very much connected as we can see them interacting with each other with uttermost comfort. As one of a question, Erode Mahesh asked Nayanthara about the first happiness she felt in her life. Nayanthara who denied to answer to that question, said that it is very difficult to answer such question. “How can I say one particular thing as my first happiness?? I can’t tell just one thing” said Nayanthara who got interrupted by Dhanush as he wished to answer on behalf of Nayanthara.

Dhanush said “It will be the day of the birth of her elder brother’s daughter.” which was acknowledged by Nayanthara immediately. Further Dhanush added how much Nayanthara is attached to Angelina (niece of Nayanthara). “She is a very little kid. Nayanthara didn’t come to shoot for 1 long hour and kept crying just because Angelina went out of town. It was atrocious. Whole unit was waiting but she was crying for the whole time” said Dhanush in that interview.

On hearing Dhanush saying that, Nayanthara said that she went to Dubai for her Christmas vacation. “Though I know that she will be back, it felt a bit bad to be without her” said the actress who further added that the day of her birth was the day she appeared for a shoot for the first time. “She is my lucky charm. Only after her birth, everything happened” the Billa actress said.

Watch the interview below from 24th minute :

After “Yaaradi Nee Mohini”, after several, both of them joined hands for a song in Sivakarthikeyan’s “Ethir Neechal”. What’s more interesting is, Nayanthara met the love of her life Vignesh Shivan during the making of her movie “Naanum Rowdy Dhaan” , which was produced by Dhanush’s Wunderbar films. The film was a huge hit and acted as a breakthrough for everyone who were associated with the project.

What do you think on this interview of Nayanthara and Dhanush ?? Comment your views below !!

VJ Parvathy Shared About The Troubles She Faced As A Woman In Her Life !! WATCH

In the most recent episode of "Survivor" show, video jockey Parvathy and Gayathri shared about the troubles she faced as a woman in her...