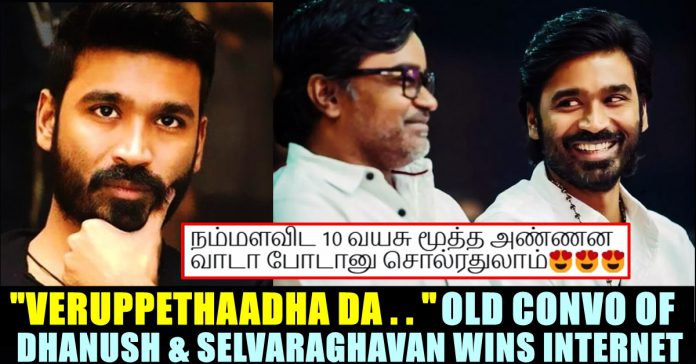 Fans have been digging up the old tweets of Tamil cinema celebrities for the past few days. Most recently, a tweet posted by young actor Sundeep Kishen about Vijay’s 50th film “Sura” went viral among the fans of actors Vijay and Ajith. Now, old tweets of actor Dhanush who recently entered Hollywood are going viral in the Internet. The tweets shows the old self of the celebrity who is tweeting only during essential events nowadays. A casual chat that took place between himself and his brother Selvaraghavan is also grabbed the attention of the audience.

Being an Indian film actor, producer, director, writer, lyricist, screenwriter and playback singer, Dhanush predominantly works in Tamil film industry. His first film was Thulluvadho Ilamai, a 2002 coming-of-age drama directed by his father, Kasthuri Raja. Over the last 19 years, Dhanush has starred in over 40 plus films. Dhanush won the Best Actor award at the 58th National Film Awards for his performance in Aadukalam and his recently released “Asuran” got national recognition as well.

The multifaceted actor gained a huge fan base through his sheer hard work. He made his International debut through “The extra ordinary journey of Fakir” in 2018 and this will be his second International project. After Dhanush got committed in the highest budgeted Hollywood Netflix film “The Gray Man”, fans of the actor can’t keep calm and celebrated it like anything. It is very well known that Director Selvaraghavan’s contribution in the growth of Dhanush’s acting career is huge. Films that were made by the duo made impact among the audience of the Kollywood film industry.

Now, a casual chat the duo had back in the year 2015 in Twitter got resurfaced in the timeline of many. In the conversation, Selvaraghavan, after uploading a picture from his college times, asks Dhanush weather he has any pictures from his school or college. An agitated Dhanush replied back asking when did he go to college and regretted for not knowing how a college life would be. When Selva tried to calm him down, Dhanush vented his emotions out saying “veruppethaadha da :(“ to his brother.

@selvaraghavan as always … Leading the pack 🙂

@selvaraghavan when did I go to college ?? 😡😡😡😡 only school 🙁 don’t even know how college life feels.

@selvaraghavan fair enough ! And I could n have asked 4 more 🙂 ok ..Now before people ask us don’t u guys have a phone let’s stop this hehe

The “verupethatha da” tweet of the “VIP” actor grabbed the attention of Twitter users in big time. Check out some of the hilarious reactions that it garnered now :

On the work front, the duo recently joined hands together for a project named “Naane Varuven” after “Thulluvatho Ilamai”, “Kaadhal Konden”, “Mayakkam Enna”. They are expected to work together on projects such as “Pudhupettai 2″, ” Aayirathil Oruvan 2″ etc.

Previous articleTN Youth Got Severely Attacked By His Friend While Playing “Free Fire” Online Game !!
Next article“Mind Your Own Business” – Follower Mocked Nakkhul’s Initiative !! Here’s How He Replied