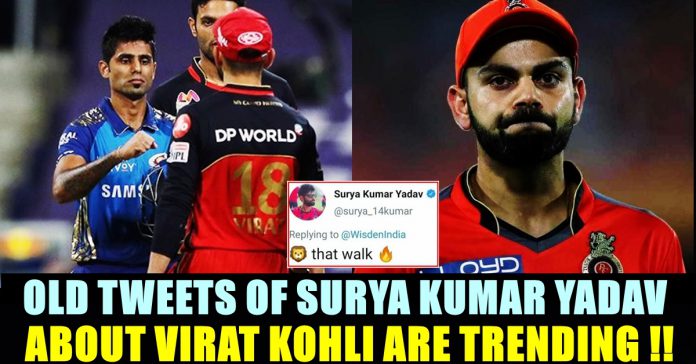 While a set of Kohli fans are deeply disappointed with the attitude displayed by Surya Kumar Yadav towards the Indian captain, old tweets of the Mumbai Indians finisher admiring Kohli’s abilities are trending in the micro blogging social media site. In the league match between Mumbai Indians and Royal Challengers Bangalore, a rift between Surya kumar Yadav and Virat Kohli took place. A video of the duo staring at each other for a long time went viral among the netizens with reactions blaming both the cricketers.

During the end of 13th over, Surya tried to hit Dale Steyn at the extra cover but the ball was fielded by Kohli. Since, it was the end of the over, Kohli walked towards the crease with the ball and Surya stood there with a deadpan expression on his face staring at Kohli. Both the players starred at each other before Surya moved on with the bat.

It is one way of sledging the batsman to make him get out by destroying his peace of mind. However, fans got upset on seeing Kohli using the method to get the wicket of an upcoming Indian talent. On the other side, fans of Virat Kohli are stating that Yadav disrespected the Indian captain which made him to stare at him.

Meanwhile, a number of old tweets of Yadav praising Virat Kohli for his achievements are resurfacing in the Internet denoting that the uncapped player always had respect towards his captain. In a tweet posted on December 5 of 2019, Surya posted the pictures of Virat Kohli topping the ICC rankings and wrote “For a reason. One word for his journey to reach top of the world. Anyone ?”

In another tweet, by posting a picture of Kohli giving his presentation ceremony speech. Yadav wrote “In the big Shoes. Where there is pressure, there is him. I have seen God walking at Number 3 for India”. The tweet was posted on 20th March of 2016.

Sharing these screenshots, fans expressed their disappointment over Kohli’s attitude. Check out some of their reactions below :

@itsmunmun and he gets a stare down.

Previous articleThis New zealand Cricketer Wants Suryakumar Yadav To Play For His Team !!
Next articleRajinikanth’s Statement About The “Leaked” Letter !!

CK Kumaravel Of Naturals Salon Demands Govt. To Refund 50% Of GST He Paid !!

CK Kumaravel, CEO of naturals salon demands the government to refund the 50% of GST he paid last year to pay salary for his...

For the past couple of days, a number of videos of people worshipping a woman named "Annapoorani" who is dressed like a goddess are...