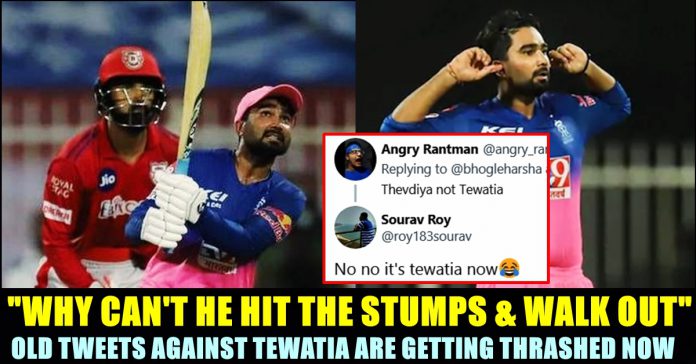 Everything including Mayank Agarwal’s century, The third best opening partnership between Mayank Agarwal and KL Rahul in the history of IPL, Nicholas Pooran’s terrific save in the boundary got overshadowed by the innings played by Rahul Tewatia, the batsman who came in to bat two down. Public started saying that his innings is a life lesson and no one should judge someone too soon.

The 27 year old who was initially struggling to middle the ball during the initial stage of his innings, smashed five sixes in an over of Cottrel and helped his team to chase the mammoth total of 224. Rahul scored just 17 runs from the first 23 balls before sending the West Indies pacer for five sixes in a single over. He ended up scoring 53 runs from just 31 balls and got out to Mohammed Shami. However, his team won the match comfortably with 3 balls to spare.

When Rahul was struggling initially to connect the ball well, some many memes and trolls were stormed, slamming the left hander for wasting balls. Many criticized captain Smith for sending him as the fourth batsman. Even experts like Harsha Bhogle, made harsh comments against the cricketer which are being trolled now.

“Feel for Tewatia. But he is losing his team the game” Harsha said in his tweet when Rahul was finding it difficult to connect which is getting brutally trolled now. However, the commentator said that his tweet was correct at the time he posted it.

Check out some of the other similar tweets and the reactions below :

Sports always keeps you humble . Never underestimate anyone . How many times we have heard It’s not finished until the last ball is bowled.#RRvKXIP , #tewatiya ,

Dont judge a book by its cover bro😅👍

No no it's tewatia now😂

You can retire anytime. The best option

“Now, I’m better. That was the worst first 20 balls that I have ever played. I was hitting the ball very good in the nets, so I had belief in myself and kept going. I was not hitting the ball well initially, I saw in the dug-out, everybody was curious because they know that I can hit the ball long,” the batsman explained his innings.

Comment your views on the innings played by Tewatiya !!