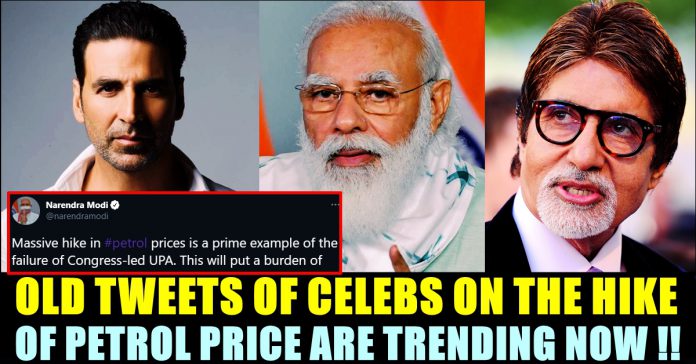 Now, a bunch of tweets uploaded by high profile Indian celebrities on the hike of petrol price is trending in the Internet. “Can a diverse and talented nation like ours be so energy import dependent?” PM Modi asked while addressing an online event to inaugurate oil and gas projects in poll-bound Tamil Nadu.

“I do not want to criticise anyone but I want to say [that] had we focused on this subject much earlier, our middle-class would not be burdened,” PTI quoted PM Modi as saying. PM Modi further said it was a collective duty to work towards clean and green sources of energy as well as energy independence.

However, people are criticizing the current government for the immense hike in the petrol price. But no celebrities who raised voice in the year 2012, cared to address the issue from their official social media accounts. Users of the internet couldn’t keep mum as they started digging the old tweets of the celebrities such as Akshay Kumar, Amitabh Bhachchan etc.

On May 24, 2012, Indian Bollywood Superstar Amitabh Bachchan uploaded a tweet trolling the petrol price hike. He shared a joke on a Mumbai resident asking petrol pump attendant to spray petrol on his car for Rs.2-4 due to the hike.

Now, replying to the same tweet, a follower uploaded a picture of petrol price reaching Rs.100 per litre and asked if he has any comments on it.

Check out the old tweet of Amitabh Bhachchan and the reply he received below :

During 2011-2012, a series of tweets uploaded by Akshay Kumar criticizing the government for the petrol price hike is also receiving trolls and criticisms. “Guys, I think it’s time to clean up your bicycles and hit the road! As per sources, expecting another petrol price hike by Rs. 4 and diesel by Rs. 2. Owning a car now is officially a status symbol” one of his tweets read whereas, the actor, through his another tweet, said “Couldn’t even get to my house at nite for all of Mumbai was queuing up for #petrol before the prices rocketed again.”

Check out his tweets and the trolls it is receiving below :

I think it's time for Canada citizen @akshaykumar to clean up his bicycle and hit the road. 😉 Mr. Canada citizen, petrol price has hit century. It's officially ₹100 / Ltr. #AccheDin pic.twitter.com/dOR24UizuT

I think it's time for Canada citizen @akshaykumar to clean up his bicycle and hit the road. 😉 Mr. Canada citizen, petrol price has hit century. It's officially ₹100 / Ltr. #AccheDin pic.twitter.com/dOR24UizuT

Bollywood Superstar Salman Khan also uploaded a tweet on May 14, 2010 criticizing the petrol price hike which became a subject to troll. “Don’t worry abt petrol , sending u a pic of gobar all u hv to do vit it is make gas. N v hv gobargas” the film actor wrote at that time.

Don't worry abt petrol , sending u a pic of gobar all u hv to do vit it is make gas. N v hv gobargas http://twitpic.com/1no7hh

Bollywood star director and director Anupam Kher cracked a joke writing “Asked my driver,”Why r u late?””Sir. Came by Cycle.””What happened to motorcycle.”His reply,”Sir, it is kept at home now as a showpiece.”:)” in a tweet which was posted on October 14, 2012.

Even Prime minister Narendra Modi, while serving as a leader of Gujarat state uploaded a tweet criticizing the government for petrol price hike. “Massive hike in “petrol prices is a prime example of the failure of Congress led UPA. This will put a burden of hundreds of crores on Guj” said Narendra Modi in a tweet which was posted on 23rd of May, 2012. Smriti Irani also came up with tweets criticizing the government for the petrol price hike.

In the year 2012, the price of petrol was Rs. 67 and today the price reached Rs.100. Pointing out these old tweets of the celebrities, public people are trolling them for keeping mum amidst the hike in petrol prices during the governance of Narendra Modi.

Previous articleDirector Venkat Prabhu Replied To Criticisms !!
Next articleFans Got Upset On Seeing This Deleted Scene From “Soorarai Pottru” !!

Actress Amala Paul who is known among Tamil audience for acting in films such as "Thalaivaa", "Myna" etc, reportedly got denied to enter a...

After multiple accusation on director Atlee regarding plagiarism of plot, scenes and graphics, now to our shock, the mannerism of the protagonist has also...