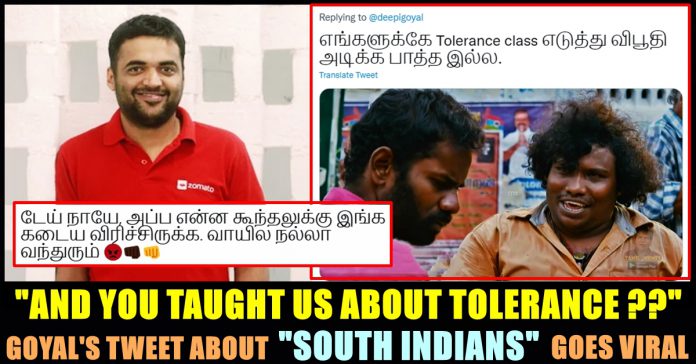 A tweet uploaded by Deepinder Goyal in the year 2012 is trending now with people of Tamil Nadu trolling him as he made fun of “South Indian Folks” in his 9 year old tweet. Many raised question about the “tolerence class” he conducted through a series of tweets after the recent controversy that took place due to one his call centre agents made a personal opinion about “Hindi” being our national language.

Did you know that M&M employs South Indian folks for word of mouth marketing? They always say yum and yum.

With just 97 likes, the tweet received 808 quoted replies so far with 400 plus comments. The 9 year old tweet is currently trending with reactions criticizing him. “You were the one who took tolerance class to us yesterday? right? Here, Eat your own words man. Hope you will tolerate others’ imperfections. And appreciate each other’s language and regional sentiments” Shyam Sundar, a journalist replied with many others trolling the Zomato founder.

You were the one who took tolerance class to us yesterday? right? Here, Eat your own words man. Hope you will tolerate others’ imperfections. And appreciate each other’s language and regional sentiments.

Did you know who Google employs as it’s CEO?

Hindi zealots: everyone should know Hindi, we make fun of non-Hindi people

Hindi zealots: the country should learn to be tolerant and appreciate each other’s sentiments https://t.co/bMs7hePtkF

You the same guy who typed this essay on “tolerance and inclusion” pal? pic.twitter.com/IF2a7EhWsS

The employee is innocent 🧐
but the founder is arrogant 🚶🚶🚶#RejectZomato https://t.co/pP8wUIELub

You are a racist.
And your app’s interface sucks. Swiggy is much better IMO. Bye. https://t.co/tvKek1fpVk

Did you know,
that M&M’s production quality, product quality went up only after employing South Indians and moving to MRV?
That’s something Mr. Goyal needs to note down.
Also, compare Mahindra ‘before Ramkripa Ananthan’ and ‘After Ramkripa Ananthan’.

வாடா நல்லவனே, at the end of the day you are the racist scumbag huh, what a lucky moment of swiggy in Tamilnadu 😆 https://t.co/1rOFs5fZ69

Can’t blame the employees when the problem starts right from the top of the hierarchy 😏 https://t.co/ooVMYYqfBr

Hey zombie.. please do not school us about tolerance.. https://t.co/jvZZSffx6V

And you taught us about tolerance… 😁😂

This one talks about tolerance in his latest tweet 😂😅😅 https://t.co/lg9EJKeucK

Check out the series of tweets he posted below :

Prabhas and Shraddha Kapoor joined hands for director Sujeeth’s Saaho, which is wreaking havoc at the box office in India. The film has grossed...