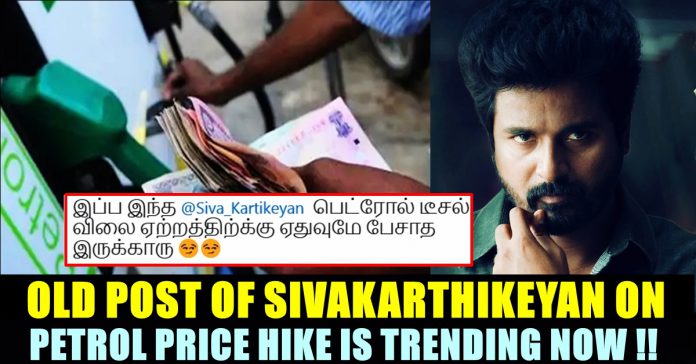 An alleged old social media post of Sivakarthikeyan about the hike of petrol price is doing rounds in Internet now. In the screenshot which is doing rounds in social media platforms now, we could see the date and year as 24th May and 2012 respectively. The screen shot shows Sivakarthikeyan cracking up a joke on the hike of petrol price. Though the Facebook post got deleted by the actor now, screenshots of it are trending in social media platforms with various kind of reactions from the fans and online users.

Many users posted tweets questioning the actor on why he is not posting such tweets now as the price of one litre petrol reached Rs. 100. On a day when petrol crossed the Rs. 100 mark, Prime minister Narendra Modi blamed the previous governments for not focussing on reducing India’s energy import dependence.

“Can a diverse and talented nation like ours be so energy import dependent?” PM Modi asked while addressing an online event to inaugurate oil and gas projects in poll-bound Tamil Nadu. “I do not want to criticise anyone but I want to say [that] had we focused on this subject much earlier, our middle-class would not be burdened,” PTI quoted PM Modi as saying. PM Modi further said it was a collective duty to work towards clean and green sources of energy as well as energy independence.

Meanwhile Finance minister Nirmala Sitharaman said that oil companies are responsible for the hike and denied government’s control over it. In a recent statement, she said “It is the oil marketing companies in India who will have to say whether they want cut it down or whether they have to go up because technically, the oil companies have been freed. Government has no control over it. It is the marketing companies which import the crude, refine it, then distribute it and put the costs for logistics and everything else”

However, people are criticizing the current government for the immense hike in the petrol price. But no celebrities who raised voice in the year 2012, cared to address the issue from their official social media accounts. Read : Old Tweets Of Celebrities On Petrol Price Hike Are Trending Now !! Now, a joke shared by Tamil actor Sivakarthikeyan is trending in Internet with many users questioning the actor on why he is remaining silent now.

In the post that got posted on 24th May, 2012, Sivakrthikeyan wrote a joke on a citizen asking petrol pump attendant to spray petrol on his car for Rs.2-4 to burn it down due to the hike. “Petrol bunk payan: Sir! evolaku sir petrol! Thiruvaalar podhujanam: oru 2 rubaaiko 4 roobaiko vandi mela thelichi udu… vandiya….kolithitu poiren. -Siva” the tweet of him read.

While many fans are sharing the screen shot to create awareness on the current situation, a number of social media users tagged the actor and questioned why he is keeping mum now. A follower went one step ahead criticized the actor of deleting the post. Check out some of their reactions below :

On the work front, the actor is awaiting the release of his “Doctor” film and is committed in a film named “Don”. Post production work of his scientific thriller “Ayalaan” is in full swing as well. Comment your views on this old post of Sivakarthikeyan and the reactions it is garnering now !!

VIRAL VIDEO : Swiggy Boy Ended Up Thrashing A Woman In Public After Trying To Pacify Her Anger!!

A viral video showing a swiggy delivery boy thrashing a woman in public on broad day light after intervening in a problem she was...

These Handpicked Memes & Trolls On RCB Will Make You Go ROFL !! CHECK OUT !!

Ever since the Indian Premier League (IPL) scheduled was announced, there was huge anticipation about the season opener. The defending champions Chennai Super Kings...