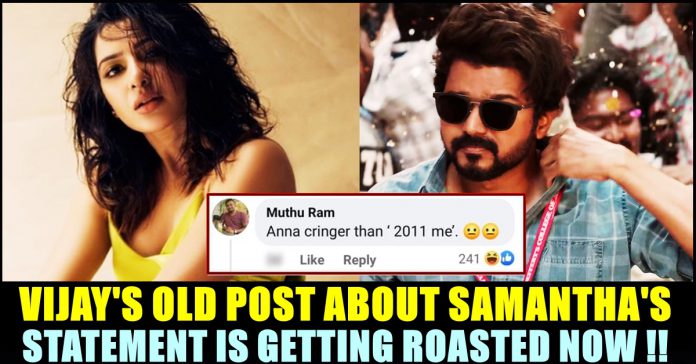 A Facebook post which was uploaded in the year 2014 by the official handle of Actor Vijay has garnered the attention of the social media users now. In the post, Vijay has quoted an alleged statement of actress Samantha with whom he has acted in films such as “Kaththi”, “Theri” and “Mersal”. The Facebook handle which is currently enjoying 7 million plus followers, through this particular post, has said that Samantha praised Vijay’s simplicity and down to earth personality. Though it could have been uploaded by one of Vijay’s admins or PROs, users of the social media are trolling Vijay now.

Actor Vijay, known for his huge fan base, was last seen in “Master” directed by Lokesh Kanagaraj. The actor who debuted 27 years ago in the Tamil film industry, influenced an enormous number of youths and kids. Several fan clubs are being operated across the state only to celebrate him. Most recent instance for the power of his fan base is a selfie the actor captured in the shooting spot of “Master”.

However, it’s natural to become a victim of massive troll after gaining fame. Now, an old Facebook post of Vijay draws netizens attention as it reads “Samantha : Vijay sir is very very down to earth person & he is so simple.”

Check out the screen shot of the post here :

Check out some of the reactions the post received lately :

However, fans of the actor are defending the post by saying that it was a fan page once become official lately. Having a loyal fan following in all age groups, Vijay always suggested his fans to ignore negativity. His fans backed the actor during his hard times. Be it a release problem or bad reports, Fans of the actor never failed to stand with the actor. He is also one of the very few Indian actors who is facing problem in releasing almost all his films.

On the work front, actor Vijay is expected to be seen in director Nelson Dilipkumar film. The film which is tentatively titled as “Thalapathy65” is bankrolled by Sun pictures and Anirudh has been committed as music composer. His last film “Master” with Lokesh Kanagaraj became a huge hit and a strong buzz is doing rounds saying that the duo are planning to reunite again for “Thalapathy 66”.

The actor recently made headlines by reaching the polling station through bicycle to cast his vote on the voting day. While it was widely believed that he is indirectly condemning the fuel price hike of the government, a statement from the actor’s side got released saying that he opted cycle to avoid blockage in the street and by considering the short distance between the polling station and his house.

Previous articleDoctor Released A Press Note Replying To Raiza’s Accusation !!
Next articleAnjana Schooled A Follower Who Called Her As “Aunty” !!

The Delhi Commission for Women (DCW) on Friday said they found cases of sexual abuse and unhygienic conditions at a shelter home for girls...

Director Suseenthiran of "Naan Maan Alla", "Pandiyanaadu" fame, in the audio launch of his upcoming film with actor Jai, said that he takes back...