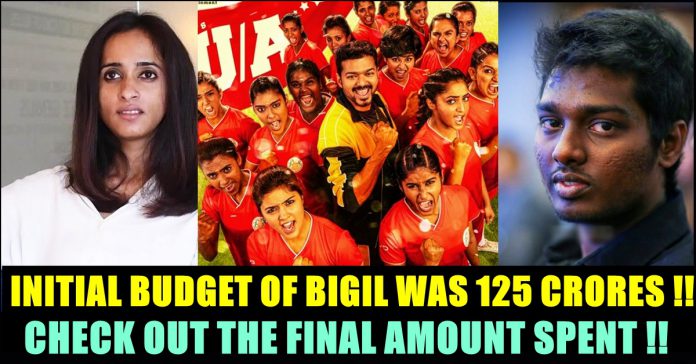 “Bigil”, actor Vijay’s 63rd film after A.R Murugadoss’s “Sarkar”, is the most anticipated film of 2019. The actor who enjoys a huge fan base in Tamilnadu, is going to appear in three different get up in the movie after “Mersal”. The film marks the third collaboration between actor Vijay and director Atlee.

In a way of adding fuel to the expectation level, the makers of the movie released the first ever official trailer of “Bigil” only to set the Internet in fire. As soon as the trailer released, it reached more than 1 million likes in a matter of minutes and is marching towards 3 million.

Produced by AGS Entertainments, Bigil has Nayanthara as lead lady. Kathir, Vivek, Yogi Babu, Indhuja Ravichander, Jackie Sheroff, Daniel Balaji are some of the other actors took part in the film. The film went on floors earlier this year and is said to be a sports drama based on Women football.

The film which expected to break all the box office records of the previous movies of Tamil cinema, made in a huge budget said sources earlier. Now, the actual numbers about the budget details of the film has been revealed.

Trade Analyst and popular movie tracker Ramesh Bala, in his tweet said that the estimated budget for Bigil is 125 crores (Rupees). Atlee, former assistant director of Shankar, completed the film by spending extra 55 crores, according Ramesh. This makes Bigil’s final budget as 180 crores. However, he didn’t mention whether it includes the salary of the actors and technicians of the movie.

He also said that Vijay gave 110 days as call sheet to complete the movie who initially accepted for 70 days to complete his portion. The tweet of Ramesh read as “Bigil ‘s original budget was ₹ 125 Crs.. Finally, the cost came to ₹ 180 Crs..Thalapathy @actorvijay originally gave 70 days call-sheet.. Then, he gave extra 40 days for a total of 110 days..Thalapathy is happy with the way final copy of #Bigil”

#Bigil ‘s original budget was ₹ 125 Crs.. Finally, the cost came to ₹ 180 Crs..#Thalapathy @actorvijay originally gave 70 days call-sheet.. Then, he gave extra 40 days for a total of 110 days..#Thalapathy is happy with the way final copy of #Bigil

Bigil is competing with Karthi’s “Kaithi” which was directed by Lokesh Kanagaraj, the one who is directing the next film of Vijay. Both the films are going to be released on October 25 and fans are very much eager to celebrate the Diwali festival with them.

Vijay has already started taking part in the shoot of his next which is tentatively titled as Thalapathy64. The film has actor Vijay Sethupathi in the antagonist role and the emerging actor of Malayalam industry is going to do an important role.

Vivek Found This Hollywood Movie’s Plot Similar To His Comedy !! He Wants To File Case !!

What Men Want is an upcoming American fantasy comedy film directed by Adam Shankman. A remake of the 2000 film What Women Want, the plot follows...