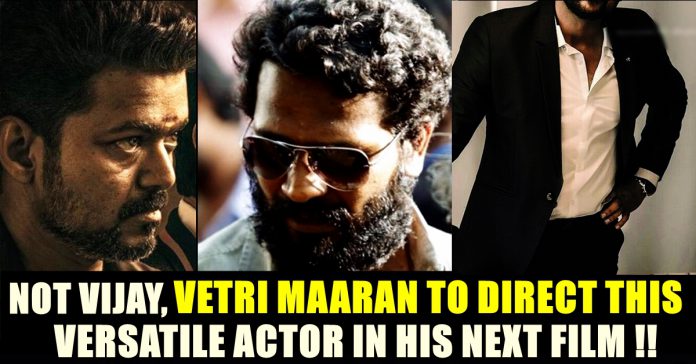 Being one of the most talented directors of Tamil film industry, Vetri Maaran is now basking in the success of his latest venture “Asuran” which was based on the novel Vekkai by Poomani. Vetri directed Danush three times in his career. He is also going to direct Danush in the sequel of Vada Chennai which marks their fourth collaboration in Tamil cinema.

Vettri Maaran’s Asuran revolves around the problems faced by Siva Sami (Dhanush).The film talks about many issues in the society, especially the caste discrimination in the rural part of Tamilnadu in the early 60’s. Sivasami, whose small amount of property was targeted by a landlord, loses his elder son in the ruckus. Followed by this, the protagonist who carries a dark past tries to overcome the problems created by the landlord.

The film which is a critically acclaimed one, unexpectedly went extremely well in the box office. Producer Dhaanu announced that the film collected 100 crores in box office which surprised the fans. Fans celebrated it for the intense content and supported it for its long run in theatres. After that fans eagerly waited Vetri Maaran to announce about his next project. To our surprise, in several interviews Vettri said that he is going to make a film by having comedy actor Soori in the lead role. The director said that it is going to be based on a poem of lyricist Na. Muthukumar.

Followed by that, another news surfaced that Vettri is going to direct actor Vijay in his 65th film. Fans of the actor strongly believed the news and started celebrating it due to the fact that they are going to witness Vijay in a never seen before role.

Now in a way of denying it, an official news has been surfaced regarding Vetri Maaran’s next project. The director is going to direct actor Suriya in his 40th film. The movies is going to be produced by V creations of kalaipuli S Dhaanu who announced the news in his offical twitter account.

This news made the fans of the NGK actor extremely happy which is evident through their posts in social media. Actor Suriya is currently busy in working for Sudha Kongara’s “Soorarai Pottru” which is being made under his own banner.

Actor Suriya who is desperate to get a hit in his career, is highly expected to give a come back through this film which is tentatively titled as Surya 40. What do you think on this announcement made by Dhaanu ?? Comment your views below !!

In List Of Ilayaraja, A.R Rahman, Yuvan, This Music Director Decided To Sing On His Own !! Check Out !!

Almost every music director in Kollywood have sung in their own composition and some even sung for other composers as well. From Ilayaraja and...

Ignore The Rumours, The Production House Itself Announced The Box Office Collection Of 2.0 !! Its Really Huge !!

Rajinikanth and Akshay Kumar starrer 2.0 is on a winning streak at the box office. The film has earned Rs 400 crore nett worldwide, leaving behind Fantastic...