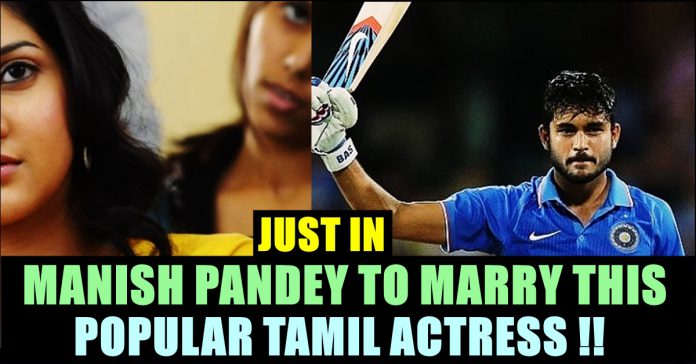 OFFICIAL : Manish Pandey Is All Set To Marry This Popular Tamil Actress !! UNEXPECTED !!

Manish Pandey is a young popular cricketer for Team India who represented the country in T20 and One day International formats. The 30 year old right-handed middle-order batsman representing Karnataka in domestic cricket and Sunrisers Hyderabad in the Indian Premier League.

The cricketer is now all set to get hitched with actress Ashrita Shetty who appeared in Tamil films. The marriage is said to happen on the 2nd of December month, this year. Both of them were in relationship for some time according to the reports.

The marriage is going to take place in Mumbai and every players of the Team India are expected to take part. However, the pair is yet to make an official announcement regarding the same.

Middle-order batsman Pandey, who recently featured for India during the successful three-match T20I series against South Africa, is currently leading Karnataka in the Vijay Hazare Trophy tournament. Pandey has featured in a total of 23 One-Day Internationals and 31 Twenty20Is for India since making his international debut against Zimbabwe in 2015.

Ashrita, known among Tamil audience for a song “Yaaro Ivan” in which she romanced actor Siddharth. Since then, she has appeared in three other movies namely Oru Kanniyum Moonu Kalavaanikalum , Indrajith and Naan Thaan Siva.

Check out some of the reactions for this couple :

Manish Pandey’s one of the significant performance came when he played for India against Australian team. In the final game of that series, at the Sydney Cricket Ground, he played a ‘match-winning inning’ of 104 not out helping India win its only match of the series.

His name also found place in the talks when India struggled to get a batsman for the 4th place in World cup tournament. However the cricketer failed to take place in the 15 member squad. He is expected to excel in the upcoming IPL tournament to impress the selectors.

What do you think on this couple marrying each other ?? Comment your views !!