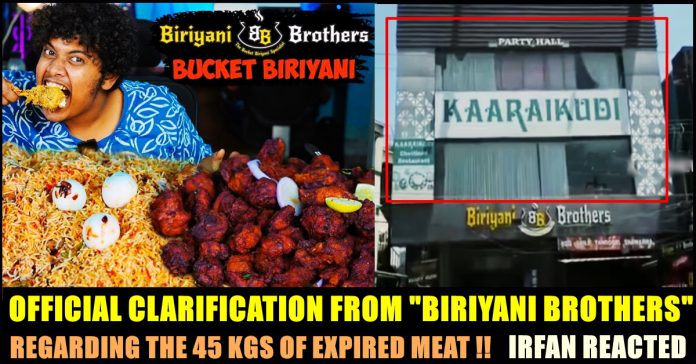 Followed by the news on 45 kilograms of expired meat getting confiscated by food inspection authorities got published in a number of prominent Tamil news channels, Biriyani Brothers came up with an official clarification, claiming that they were wrongly portrayed due to the confusion on two different restaurants functioning in a same building. Youtuber Irfan, comment section of whose video about “Biriyani Brothers” got spammed by public after the news went viral, also reacted to the issue by uploading a document in his Instagtram handle which proves that the expired meat was confiscated from a different restaurant which functions in the same building as “Biriyani Brothers”.

It was reported that the restaurant named “Biriyani Brothers” which is located between Tambaram and Velacherry, got accused of having a stock meat of 45 kgs in their kitchen and the authorities had stopped the restaurant from functioning temporarily. It all started after a 10 year old kid Roshini died due to eating Biriyani at a hotel named 7 Star Biriyani that is located at Aarani, Thiruvannamalai.

Reports suggested that Biriyanis that were made of expired meat were served to the customers. After the arrest of 7 Star Biriyani’s owner Baadshah and cook Muniyandi, food safety authorities started conducting inspections at the Biriyani restaurants across the state. Food safety officers of Kanchipuram district conducted inspection at the building that is located near Tambaram.

“We have destroyed 45 kgs of expired food items from this hotel alone. Even 50 plus eggs which were boiled yesterday are ready to be served for the customers. We have issued a legal notice to the owner, pointing out the flaws of this restaurant” said Anuratha, Food safety officer after conducting inspection at the “Karaikudi Chettinadu restaurant” which is located in the first floor of the building. However, in mainstream media portals, it was wrongly reported that the expired food items were confiscated from “Biriyani Brothers” which is functioning in the ground floor of the same building.

The hotel authorities of Biriyani Brothers had provided a document as proof to confirm the same which is going viral in social media platforms. The document issued by the Tamil nadu food department, points out the disadvantages of “Karaikudi Chettinadu restaurant” and demands to resolve the issues within a said date and warns to take legal actions if failed.

Youtuber Irfan who uploaded a video suggesting “Biriyani Brothers” to his followers two months ago, reacted to the issue by uploading the same document in his Instagram handle. “All infos of that raid. Meme pages mistakenly trolled the wrong restaurant” said Irfan while uploading the notice.

Earlier Kasthuri pointed out four poisonous twitter users and asked for their address in her official twitter ID. Unfortunately, through their display pictures and...