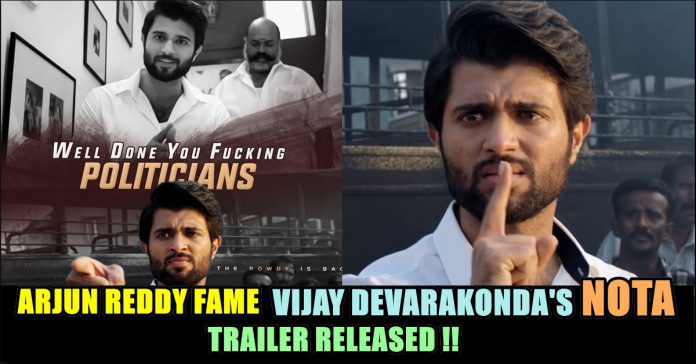 Tollywood star Vijay Deverakonda was catapulted to fame after delivering three hits in a row. It was Pelli Choopulu which marked his entry as a hero. If Arjun Reddy’s success brought him closer to youngsters, it was Geetha Govindam that made him a commercial hero. Now, Vijay Deverakonda is all set with his next release NOTA, a Tamil-Telugu bilingual directed by Anand Shankar. Taking to Twitter, the actor posted a couple of days ago that the trailer will be released today.

It is being rumoured that NOTA will have a worldwide release on October 4. However, an official confirmation on the film’s release is yet to come.

Since NOTA marks Deverakonda’s debut in Tamil, he has taken the initiative to dub his own lines for his character in the film.
[wp_ad_camp_1]

NOTA is tipped to be a socio-political thriller in which Deverakonda might be playing a politician. Mehreen Pirzada, Sathyaraj and Nasser will be seen in important roles in the film, produced by Studio Green. The trailer looks so promising and it is surely keeping Indian politics as the Argumentative subject. Watch the trailer below :

What do you think on the trailer , let us know !!

Vivek’s Old Comedy Became True In Sujith’s Death !! Here’s What The Actor Has To Say !!

For past 5 days, people of Tamilnadu has been worrying and glued with the news channels. They couldn’t even celebrated the Diwali festival wholeheartedly...