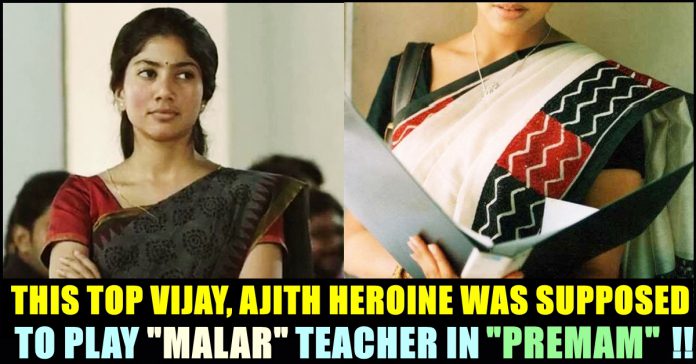 Director Alphonse Puthren recently conducted a chat session with his Facebook followers about his blockbuster flick “Premam” and conversed them about the making of the film and the choices he made during the film’s shooting and prior that. Interestingly, the filmmaker named a leading heroine’s name and said that he was trying to cast her as “Malar” teacher initially instead of Sai Pallavi while replying to one of his followers on the impact of “Tamil” in his films.

Premam is a 2015 Indian Malayalam-language romantic comedy film written, edited, and directed by Alphonse Puthren. It is a three-part coming of age portrait of the lead finding his true love. Produced by Anwar Rasheed for Anwar Rasheed Entertainment, the film stars Nivin Pauly, Sai Pallavi, Madonna Sebastian and Anupama Parameswaran in the lead roles. The film features 17 debutant actors with Rajesh Murugesan composed the music.

Being a Mollywood movie, The film garnered a huge reception from the audience of Tamilnadu. The film’s theatrical run in Tamilnadu was unexpected and is being celebrated by Tamil people till today. Alphonse Puthren debuted as director in a Kollywood film “Neram” which had Nivin Pauly in the lead. But “Premam” impressed Tamil audience the most comparing to his first film.

Now, after five years after the film’s theatrical release, Alphonse conducted a chat session with his Facebook followers. When one of them questioned Al about portraying a Tamil originated girl as female lead in his Malayalam film, he said that he was initially planning to cast actress Asin in the lead role as a Kerala born woman. The filmmaker said that he couldn’t contact the actress who paired with some of the top heroes in Kollywood and Mollywood. She paired with Ajith, Vijay, Suriya and many others during her prime.

“I noticed in your past films, influence of tamil language eg. malar character and tTmil background songs etc. I am sure that during your Chennai life, friend circle and surrounding might influenced you, that reflected in your movies as well. In fact, Movie is makers choice and it comes from experience. In Premam, it synced well, action and dance for Tamil song perfectly suit with the background. College sequence or middle portion, mass scenes were elevated, one of the reason might be tamil speaking female lead. How do you see the influence of Tamil language in Malayalam movies and what is your opinion if malar character replace with Malayalam speaking character?” asked the followers.

Replying to him, Alphonse said “In the beginning when I wrote the script it was Malayalam. I wanted Asin to act in Malar’s Malayalam version. The character was from Fort Kochi… I couldn’t contact Asin. Nivin also tried. Then I gave up the idea and wrote it in Tamizh. This is in the beginning stage of the script. I studied in Ooty when I was too young and then did my film studies in Chennai. That is why the strong Tamizh connection.”

On the work front, Alphonse is working on a project named “Paatu” which is going to have Nayanthara and Fahad Fazil in the lead roles. The film is going to be a musical drama according to reports and Alphonse is planning to compose music for the film himself.