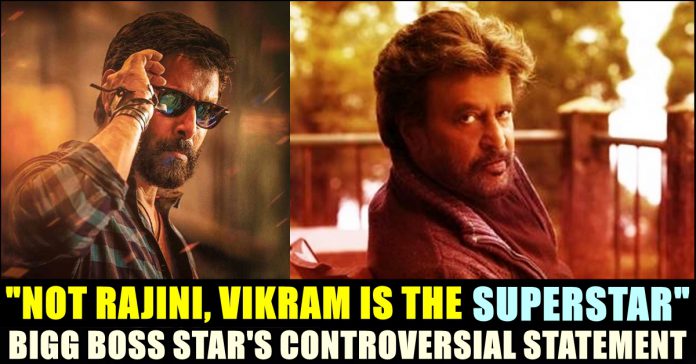 “Not Rajinikanth, Vikram Is The Superstar” Says This BIGG BOSS STAR !!

Known for her controversial statements, Meera Mithun came up with a new tweet alleging that actor Vikram is the Superstar of Kollywood film industry, not Rajinikanth. Meera Mithun rose to fame among Tamil audience since she appeared in the Kamal Haasan hosting Bigg Boss show as a contestant. She grabbed wide attention after accusing legendary filmmaker Cheran for physically harassing her during a task.

After getting eliminated, she kept her followers engaged through her public statements and tweets. Recently, she tagged Prime minister Narendra Modi and said that she wants to become the chief minister of Tamil nadu state, only to get trolled by the online users. The aspiring actress appeared in a number of Tamil films in minor roles and eyeing for a right opportunity to prove herself.

In this recent tweet of her, Meera Mithun posted a tweet saying that actor and upcoming politician Rajinikanth is a bad example to this society. She accused him by saying that he is promoting himself even during this pandemic situation. Further Meera said that Vikram deserves to be a Superstar as he doesn’t promotes himself. “Who should be an example, is being the bad example Rajinikanth doing full on paid promotions with his team that too at this COVID pandemic. Well I would say #ActorVikram is the Superstar ! He doesn’t promote, because he knows his own achievements. His Work Speaks always” read the tweet of the model. She tagged the official twitter account of Rajinikanth while posting the tweet.

Who should be an example, is being the bad example @rajinikanth doing full on paid promotions with his team that too at this COVID pandemic. Well I would say #ActorVikram is the Superstar ! He doesn't promote, because he knows his own achievements. His Work Speaks always 💯

Earlier Meera mitun accused legendary actor Kamal Haasan by saying that he used his influence to remove her from “Moodar Koodam” Naveen’s upcoming film “Agni Siragugal” and casted his younger daughter Akshara Haasan in the role she was supposed to play. However, the filmmaker refuted her statement and said that Akshara Haasan was brought on to replace Shalini Pandey who went to Bollywood to pair with Ranveer Singh.

Now, this tweet from the Bigg Boss icon, made few of her followers to react. Check out them below :

Followed by her Bigg Boss stint, the scenes of Meera Mithun from Sivakarthikeyan’s Namma Veetu Pillai was removed and the actress reported about it in her twitter account. Meera Mitun won the title of Miss South India in 2016, only to return it to Sanam Shetty due to breaking the rules of the event. She made her film debut in Sri Ganesh’s 8 Thottakkal and played a role as Kalaiyarasan’s wife in Surya’s Thaana Searntha Kootam.

Previous articleAjith Fans Are Not So Happy On This Special Day Of MSD !!
Next articleDeputy Commissioner Lauded Sivakarthikeyan For Being A Teetotaller !!

Here’s The List Of Celebrities Who Changed Their Profile Picture & Wished For Vijay’s Birthday !!

Vijay’s first film as a lead was his father SA Chandrasekhar’s 1992 directorial Naalaiya Theerpu. In a sweet note, SAC (as he is popularly...

Anirudh Warned This Filmmaker In Public !!

Tamil music composer Anirudh Ravichander who is spending his quarantine period in his music studio, yesterday uploaded series videos of himself playing the Background...