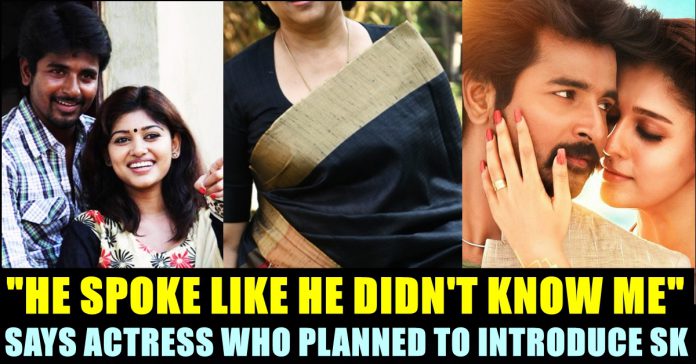 Director and Actor Lakshmi Ramakrishnan revealed that she was supposed to introduce Sivakarthikeyan to the film film industry. Actor Sivakarthikeyan, who enjoys a fan following among all age groups and across genders now, is the upcoming star in Tamil film industry. He was last seen in Namma Veetu Pillai and Hero directed by Pandiraj and P.S Mithran respectively. Being one of the busiest actor in Kollywood industry right now, SK is having commitments for nearly half a dozen movies. His third production venture also getting ready on full swing.

He was debuted to Tamil film industry through the film “Marina” which was directed by Pandiraj. Now, actress Lakshmi Ramakrishnan who is very much known for her onscreen appearance and hosting shows, came up with a tweet saying that she was the one who had an opportunity to introduce him. She said it while replying to one of a follower who questioned after seeing a short video in youtube.

Lakshmi ramakrishnan immediately came up with a tweet saying that it is not a short film but a feature film. “I was supposed to introduce him. After I dropped the project he did #Marina. His character in #kurahl786 had so much scope. But, he did great with respect to commercial success without that :)” her reply comment read.

Not a short film! Meant to be my debut directorial with #SivaKarthikeyan, I was supposed to introduce him. After I dropped the project he did #Marina. His character in #kurahl786 had so much scope. But, he did great with respect to commercial success without that 🙂 https://t.co/0bxfQJnWBA

And #Abhinaya was to do the heroine’s role 😍😍 I would love to work with her , InshahAllah, might do #Kurahl786 some day 🙂 https://t.co/0bxfQJnWBA

Followed by this, the “Aroghanam” director also wrote a tweet saying that she got upset when Sivakarthikeyan spoke like he didn’t know her. She said that Sivakarthikeyan travelled with her for two long years in the journey of the shelved film “Kurahl”

Tiff with #Sivakarthikeyan is long forgotten. happy to see him so successful. it is only his talents that took him where he is now:) I was upset when he spoke as if he didn’t know me! , he travelled with me for two years in my journey with @Kurahl786 he was like a family member! https://t.co/CzxuaBLr4X

It is notable that the “Hero” actor used her popular phrase “Ennama Ippadi Panreengalammaa” in a song which went extremely viral. It took place in the film “Rajini Murugan” and instigated controversy.

Actor Vijay literally caused a storm in Internet by uploading the selfie he took with his fans in Neyveli yesterday. Since the incident took...

Tamil Nadu Dalit Youth Thrashed By A Group Of Men !! CAUGHT ON CAMERA

On Wednesday, a video of a Dalit youth getting brutally assaulted by a gang of six men went viral in social media. After the...