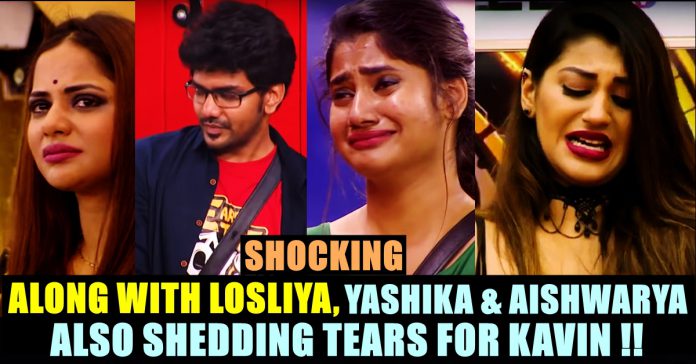 As a result of 3 promos that are released today, fans of Bigg Boss came to a conclusion that Kavin is getting away with 5 lakhs without competing in the final week of the show. Announcing that the stand-alone winner of Bigg Boss Tamil 3 would be rewarded a sum of Rs. 50 lakhs, Bigg Boss gave the contestants an opportunity to take home Rs. 5 lakhs. But there was a catch – if any of the contestants intended to take the offer, the housemate should leave the house immediately with the Rs. 5 lakh amount.

Kavin who accepted it went out of the Bigg Boss house is now the trending topic of Internet. Two set of people are trolling and praising the actor for leaving the show in mid way. Check out the last promo that was released today :

As soon as the promo released, many started reacting to the news. To our surprise, former Bigg Boss contestants, Yashika Anand and Aishwarya Dutta expressed their sadness on the “Natpunaa Enna nu Theriyuma” actor terminating himself.

Aishwarya Dutta in her twitter account, wrote “Really felt sad for kavin exit….may god give him all the strength and power….” in a way of expressing her emotion whereas Yashika Anand posted a story in her Instagram account with a sad emoji about Kavin’s state. Check out her tweet below :

Really felt sad for kavin exit….may god give him all the strength and power….@Actor_kaviin

Yashika in her story wrote “Kavin is out of Bigg Boss”. Check out the screenshot of it below :

Comedy actor Sathish who is one of an ardent follower of Bigg Boss show said that he is not believing it. He said it by sharing the 3rd promo of Vijay Television’s twitter account :

Dorothy Sylvia, wife of Sandy also expressed her sadness on Kavin getting out of the house with sad emojis. “Why brother you did this”

Despite of the humongous hatred he receives, Kavin managed to stay inside the house by beating many contestants in eviction process. Surprising fact is that he got saved as the first contestant in most of the episodes.

After entering the Bigg Boss house, the actor grabbed the attention of media for his strategy of loving 4 girls at the same time to win the title and to keep the audience engaged. Though it looked funny initially, things turned ugly when he gave his word to Sakshi, one of the four female contestants.

What do you think on these reactions by those celebrities on Kavin’s termination ?? Comment your views !!

Ace Tamil actress Rohini who is known for acting in films across South India, registered a Police complaint through online against self proclaimed political...