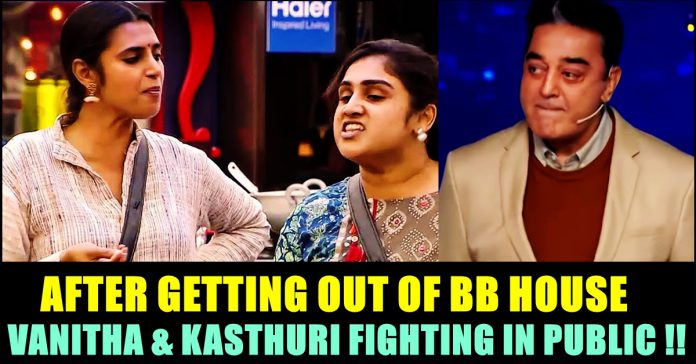 The cold war between Vanitha and Kasthuri during their Bigg Boss stint was very much evident with their behaviour. It all started when Vanitha accused Kasthuri for calling her as “Vaathu” (Duck) during school students task. Though Kasthuri denied it, every other contestants believed that Kasthuri did it to mock Vanitha.

Vanitha confronted Kasthuri at that time and demanded an apologize from her immediately. It didn’t end there as both of them often had verbal spats inside the Bigg Boss house and now after being evicted from the house both of them seems to have not convinced with each other.

Kasthuri who stood by Madhumitha when she hurt herself by cutting her wrist, accused Vanitha & co for being mum. Now in a recent interaction with fans, vanitha said that everything Madhumitha did was only for attention. After that she posted a tweet asking her followers not to question her anymore about Bigg Boss season 3. She said it is just a game show and asked her followers not to fight with each other.

I have enough work to deal with.dont feel like going back into the house again but have no choice for finale.for people who want to see me again and @vijaytelevision @EndemolShineIND . Please stop messaging me about this show and ask me anything else. im seriously bored

On seeing this tweet, Kasthuri immediately replied to Vanitha by saying that she said the same in Bigg Boss house. Kasturi alleged that Vanitha at that time yelled at her by saying that it is not a game show but a reality show.

Just wish this good sense had prevailed when she was there. I still remember clearly when i begged her, ” why so toxic, why fight, it is a game show” , she yelled ” This is a reality show ‘ !
But now finally its a fake drama? Only because some truths will never be shown! https://t.co/05PMz8bNz1

Vanitha slammed back Kasturi by saying that Bigg Boss is a drama genre show and people watch it only for entertainment. Her tweet read as “Omg u are really unstoppable aren’t u.@KasthuriShankar. you came there to entertain yourself. i came to #BiggBossTamil3 to entertain the audience. The show was a great success due to all the elements in the show.bigg boss is a drama genre show.everyone watching for entertainment“

Omg u are really unstoppable aren’t u.@KasthuriShankar. you came there to entertain yourself.i came to #BiggBossTamil3 to entertain the audience. The show was a great success due to all the elements in the show.bigg boss is a drama genre show.everyone watching for entertainment https://t.co/wlsvsGkw28

In a reply to one of a follower Kasthuri said that Vanitha is “hiding a whole pumpkin in rice” a popular saying in Tamil :

Previous articleWATCH : “She Did It Completely For Attention” Vanitha Opens For The First Time About Madhumitha Controversy !!
Next articleTop Technician Revealed This Secret On Promoting Movies Online !! SHOCKING !!

While entire social media came in to support the statement released by actor Suriya regarding the demise of 3 students who were supposed to...

Earlier Kasthuri pointed out four poisonous twitter users and asked for their address in her official twitter ID. Unfortunately, through their display pictures and...