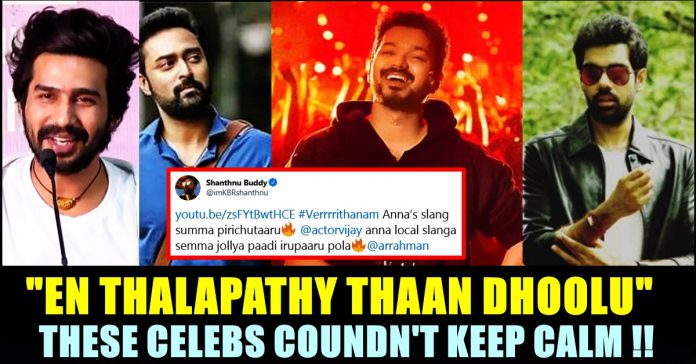 Not Only Fans, These Celebrities Couldn’t Keep Calm On Witnessing “VERITHANAM” Single !! Check Out !!

One of the highly anticipated films of the year is Atlee directorial Bigil. The sports drama will see Thalapathy Vijay in dual avatar. The promos of the film have already generated immense hype and curiosity amongst fans. But if there is one aspect of the film that has left all the Thalapathy fans in a state of frenzy is that fact that he will also be lending his voice to a song title Verithanam. Moreover, the song is composed by AR Rahman, the legendary two times Academy Award winning music composer.

Ever since Vijay and AR Rahman’s collaboration as a singer and music composer was announced, fans have been waiting for the song with bated breath. And finally, the makers revealed the release date of the song and along with the release date, a teaser video was also dropped to tease the fans further. The good news for all the die-hard fans is that the song Verithanam will be release tomorrow September 1 at 6 pm.

As soon as the single released, Fans of the actor couldn’t keep calm as they made an record of posting more than 1 million tweets in twitter. On the other hand celebrities also, for their part expressed their excitement through their tweets. Check out some of their reactions here :

So much energy from #ThalapathyVijay 👌 Semma jolly track this is, going to be a BIG-il hit with the masses! @arrahman sir MAGIC 🙂 💪💪 https://t.co/CUVy7veE4j

What do you think on this craze among stars for a star ?? Comment your views below !!

“Nayanthara Stopped Wearing Make Up Because Of This Reason” – Wikki

Director Vignesh Shivam came up with a heartfelt note on the special day of Nayanthara's birthday in his official Instagram handle. Through his post,...

Internet Mourns For The Demise Of Two Teen Kids After Their Bike Video Went Viral !!

Users of social media platforms has been expressing their condolence messages after a video of two teen boys speeding their bike and losing control...

Not long ago, a report regarding a press reporter testing positive for coronavirus surfaced. Now, to our shock, 26 employees of Sathyam TV tested...

Tamilnadu have registered 3550 confirmed cases of Coronavirus so far. Among the total cases, 1754 reported from Chennai city. The capital of the state...