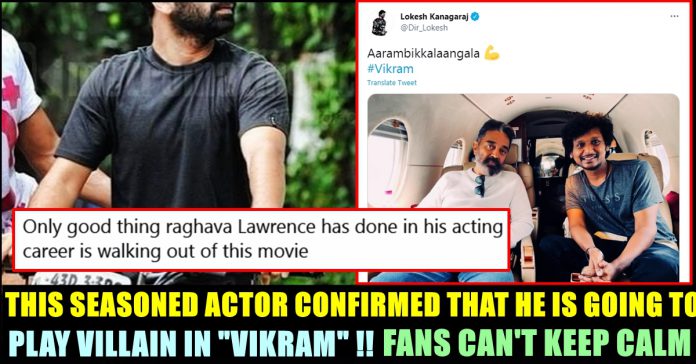 Amidst the buzz which did rounds about actor Raghava Lawrence playing villain in Kamal Haasan-Lokesh Kanaraj’s upcoming action flick “Vikram”, a top South Indian actor named Fahad Fazil who is known for delivering top notch performances has confirmed that he is going to act in the film in a recent interaction with a media portal. The news excited the fans of actor Kamal Haasan and Fahad Fazil as both of them are known for their dedication when it comes to acting.

One of the most awaited films in Tamil film industry post COVID 19 pandemic is Kamal Haasan- Lokesh Kanagaraj’s “Vikram”. The film’s title teaser which got released on the 66th birthday of the “Ulaganayagan”, became a huge hit among fans and created a huge anticipation among them. The teaser has garnered 15 million plus views in youtube so far.

Kamal Haasan who is also a leader of a political party named “Makkal Needhi Maiam”, got busy with his party works due to the assembly election and Lokesh Kanagaraj who recently recovered from COVID 19 virus was busy completing the pre production works of the film. Now, reports on one of the important casts for the film got surfaced in the Internet.

“Vikram” which is going to be directed by the “Master” maker, is going to have Sathyan Sooryan as the camera man. Philomin Raj handles the edit whereas Anirudh Ravichander is going to compose music for the film. Kamal Haasan bankrolls the film under his own banner Raaj kamal internationals.

The title teaser showed Kamal Haasan welcoming a number of policemen and politicians with deadly weapons. “Vikram” became the first Tamil feature to have a 142 seconds long motion video teaser just for the release of the title. Director Lokesh Kanagaraj who identifies himself as an ardent fan of Kamal Haasan, was lauded by his colleagues and by the fans of Tamil cinema for the work he pulled off in the teaser by having Kamal.

However, due to unknown reasons, Lawrence opted out of the project and now, Fahad Fazil has confirmed that he is going to act along with Kamal Haasan in “Vikram” during an interaction. “I am also doing “Vikram” with Mr. Kamal Haasan. I am very excited about it” said Fahad in the interaction.

As soon as the news surfaced, fans got extremely happy and started celebrating the combination of Fahad and Kamal they are going to witness soon. Hashtag “Vikram” is trending at top in Twitter as well. While talking about the film, Lokesh Kanagaraj, in an interaction has said that the film is going to be an action thriller.

That's the news you got to wake up to.

Now, here’s a reason to watch the #FDFS of #Vikram! #FahadhFaasil and @ikamalhaasan 🔥🔥🔥
Uff ! Imagine the number of close up shots of those faces and EYES!
Casting coup @Dir_Lokesh 👏👏

Only good thing raghava Lawrence has done in his acting career is walking out of this movie https://t.co/Bb9FCIOXf2