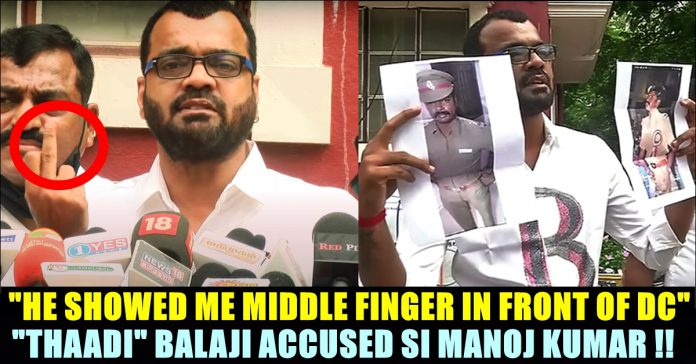 Comedy actor Balaji who has been appearing in Vijay TV’s reality shows as a judge, made a complaint against SI Manoj Kumar and said that he has been disturbing his personal life for a long time. He wants him to get the highest level of punishment beyond just transfer. Balaji has been constantly making allegations against SI Manoj Kumar for past two years for influencing his wife Nithya who is known among TV audience for her participation in Bigg Boss show, along with Balaji.

“Two years ago, I gave complaint against SI Manoj kumar for disturbing my family by advicing my wife Nithya. Since my complaint, he never appeared ion Kilpauk police station for interrogation. Two days ago Deputy commissioner called me and asked me to come to police station saying that SI Manoj Kumar will be present. As usual they bought both our statements and said that the matter will be investigated. I expect he gets an appropriate punishment for his deeds” said Balaji who added that he has to look for other ways if Police didn’t punish him.

“Usually, if a police officer is accused of a crime, he is just getting transferred. Manoj Kumar should be terminated from his job or at least he should not get promotion in his lifetime.” said Balaji.

“After Bigg Boss, we were planning to live together by accepting the advice of Ulaganayagan Kamal Haasan. Even after that, SI manoj Kumar intervened and tortured my wife. These kind of Police officers are the black marks of the entire department. He will get the punishment soon” he stated in the press meet.

Balaji further revealed how Manoj Kumar behaved in front Deputy Commissioner. “With the presence of such higher authority, Manoj Kumar make obscene gestures towards me when Deputy commissioner turned aside for something. He folder his tongue to threaten me and showed his middle finger. If he is behaving like this in Police station, this proves his original character. He will face the consequences definitely. He collapsed my entire family.” said Balaji who also said that the investigation was lasted 2 long hours.

“I mentioned it while addressing the Sathankulam issue. They are behaving in a cheap way for women who are coming to police station to make complaints. There are good cops in police department but people like Manoj Kumar are ruining the good name of it. I will never leave this issue without getting Manoj Kumar, a proper punishment” said Balaji. “Me and Nithya will resume our marriage life soon” he added.

Balaji is working in Tamil film industry for past 20 plus years and is known for appearing in comedy scenes along with Vivek and Vadivelu. He received wide fame after collaborating with Vijay TV, in which he participated in shows such as Boys vs Girls, Kalakka Povathu Yaaru, Bigg Boss etc. Popularly known as “Thaadi” Balaji, he married to Nithya in the year 2009 and the couple is having a daughter named as Poshika.

MS Dhoni’s swashbuckling 84 went in vain as Royal Challengers Bangalore edged past Chennai Super Kings at home in a last-ball thriller on Sunday...

In her recent interaction with a media portal, actress Amala Paul who is known for acting in some of the blockbuster Tamil films, expressed...