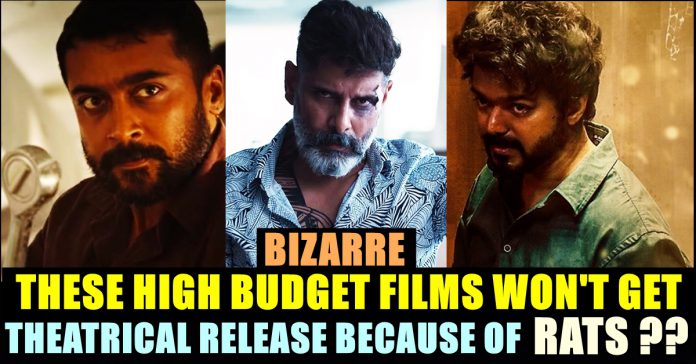 As 21 days lockdown is implemented, people from across the country are staying at home and hoping for the crisis to end soon in order to get back to the normal life. COVID 19 which killed more than 1 lakh people is a serious threat across the world right now. To avoid community spread in India, Prime minister of the country asked people to stay home for 21 days which is till April 14. However, to kill boredom, many people are involving in several activities in social media.

Major disappointment among the fans of Tamil cinema is the postpones of their favourite actor’s upcoming movies. “Master” which was supposed to get a theatrical release on 9th of April got postponed without a proper speculation regarding the release date. Makers of it came up with a new poster saying “We miss you, just like how you miss us! Hoping that a master-mind finds an antidote and put an end to Corona! We’ll come back stronger nanbaa. Stay home, Stay Safe.”

Vikram’s Cobra, makers of which released their first look recently forced to reach India while they are shooting in a foreign location. When one of a fan asked its director to release the teaser of the film on Vikram’s birthday, Ajay Gnanamuthu said “Not possible!! All studios closed!! Will take a long time”

Not possible!! All studios closed!! Will take a long time 😒

Surya’s Soorarai Pottru and Ajith’s Valimai are also facing similar problems in the production of their films due to the corona crisis. Now, the most unfortunate fact about these films, they will face problems even if this corona crisis comes to an end. Even if government announces that there will be no harm due to coronavirus in near future, people would hesitate to mingle with each other, especially in a closed space such as theatres and malls.

The one more major problem, reported by Valaipechu youtube channel says that one of a popular theatre in a mall in Chennai, destroyed due by rats due to lack of maintenance since the lockdown announcement. They said that theatres in Chennai would get opened till June month at least.Considering the theatrical release in other states. “If we take Master film, it must get theatres in states such as Kerala and Andhra. But once the Corona crisis ends, films in those particular states will get priority instead of other state films” said Bismi.

“When a popular mall’s authority visited its theatre after 15 days with the government’s permission, he came to know that rats have destroyed all the seats and electrical wires. He who got dejected phoned all the theatre owners in Chennai and asked them to check if their theatres are alright. Even if those films gets ready, theatres should get ready for them to release” one of a Journalist said.

The Indian team is currently playing the first of the five-match Test series against England at Edgbaston in Birmingham. After shambolic outings in the...