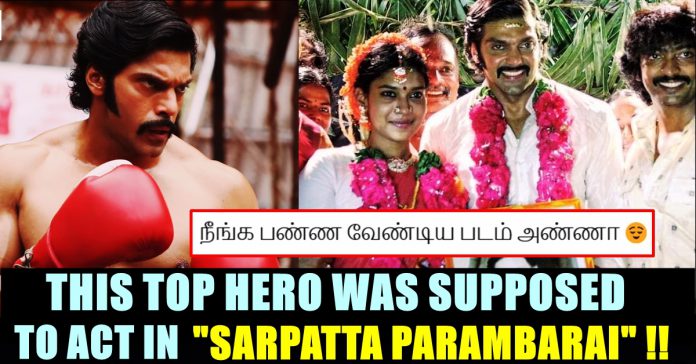 The first look of Pa. Ranjith’s most awaited “Sarpatta Parambarai” was released on Wednesday with huge expectations. Directed by Pa. Ranjith, the film is going to have Arya, Dhushara, Pasupathy, John Vijay, Kalayarasan in the lead roles. After releasing the first look, Ranjith appeared in an interaction with Vikatan and shared about many informations about the film including the core plot.

The film is touted to be a period drama that is set in mid 70s. The film’s core plot is based on real incidents that took place in North Chennai. Talking about the film’s background, Ranjith said that the story demanded the locations of North Madras. He says that the word “Sarpatta” could mean four knives and added that he is not sure about it. “Many people are using the wold without knowing the real meaning of it” the director says.

Talking about casting Arya as lead in the film, Ranjith said that he never wrote a story by having an artist in his mind. “For “Kaala”, I could have written for Rajinikanth sir. But I never wrote a script by having an artist in my mind. While casting Karthi for “Madras”, I thought whether he could fit into the story and realized that he definitely could” Ranjith said.

“Suriya was supposed to play lead in Sarpatta Parambarai, right?” asked host to which Ranjith smiled and said that many people were in talks including Suriya. “I know Arya sir since “Madras” times. He always asked me to do a script for him. That is the reason why we joined hands together in this film” he said.

Watch the interaction below :

Fans in social media platforms couldn’t keep calm after knowing about the information. They started reacting on how it could have been if Suriya did it. Fans of actor Suriya also reacted on the same. Check out some of the reactions below :

Just imagining the FL with Suriya😍🔥

Ranjith shared about many other interesting facts about the film. The “Madras” maker said that many Tamil films and screenplays were made based on the incidents. “Boologam was one of such film. Many people will make films based on these incidents in future as well” he said.

He also said that he is planning to make a magical realism film like Alejandro Gonzelz Innaritu. “I am also planning make a love film” the filmmaker added.