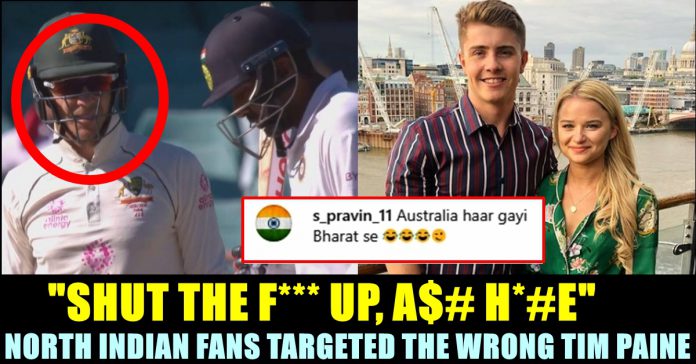 After winning the series against Australia at the Gabba, Indian fans went all guns blazing against Tim Paine, the Australian captain. They have been slamming him in social media platforms for his abusive behaviour on the field against Indian players. Meanwhile, a random social media user named “Tim Payne” has been facing the wrath of team India’s fans as they couldn’t differentiate between the Instagram account of himself and the account of the Australian captain.

India won the series against Australia by chasing 328 runs in the second innings. With the help of Pant, Pujara, Gill’s heroic batting knocks, team India managed to chase the mammoth total with three overs left in the day. The historical victory made fans extremely happy who are lauding Ajinkya Rahane for captaining the team effectively. “Every session we discovered a new hero” said Sachin Tendlukar lauded the team’s memorable victory.

During the third test match, Australian captain Tim Paine passed nasty comments while Indian all rounder Ashwin was in the crease. He said “Can’t wait to get you to the Gabba” referring to the Brisbane test. Replying to him, Ashwin replied “Can’t wait to get you to India, that will be your last game”. Further he continued to sledge the Tamil nadu cricketer for a long time.

This is where Tim Paine and the Aussies lost the whole damn series 💉💉 pic.twitter.com/Zr2TV1pK2E

Agitated fans started slamming Tim Paine in social media platforms and even people from the crowd who went to watch the match on live, also booed him during the post match presentation. Meanwhile, a number of fans, out of frustration breached the social media account of a man called “Tim Payne” and started sending him abusive texts. They started commenting on almost all the posts of him including in which he could be seen posing with his loved ones. Most of the comments were written in Hindi language as well.

Disturbed by the enormous number of messages, the man whose bio says that he is from London, uploaded a story in his Instagram account writing “The Indian cricket fans need to allow me thinking I am the Australian cricket captain Tim paine. As Instagram has mistaken me for him and he doesn’t seem to have socials I receive all the backlash for his antics against India. Over 600 plus message requests and constant spam on comments of my photos. Some very I interesting ones” he said and decided to upload some of the messages he received.

Check out some of the messages he received below :

“In summary, and this is just about 1/100th of it. I am indirectly currently the most hated man in the whole India. Safe to say that I have never hated cricket more” he said in his last story.

Surprisingly, Payne also came up with a hilarious post morphing his face into Piane’s to make fun of the misconception. “Plot twist … 👍🏏😂” he said in the caption and added Gabba as his location.

On 16th of January, Tim also came with a tweet tagging the original twitter account of Tim paine and asked him to help. “Hi @tdpaine36, can you help me out here. I’m doing my best. Hope you’re well.” his tweet read.

Hi @tdpaine36, can you help me out here. I’m doing my best. Hope you’re well.

People appreciated Paiyne for handling the situation in a light manner, without losing his nerves. Comment your views on these posts of Tim !!

Kaala Need Another 280 Crores To Be Called As A Hit !! : Here’s The Exclusive Public Review !!

Superstar Rajinikanth’s Kaala, slated to release on June 7 worldwide has earned a massive Rs 230 crore before the release of the film through...