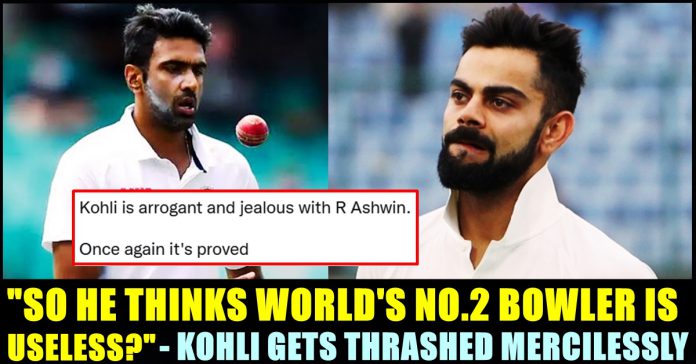 The most expected fourth test between England and India started with the hosts winning the toss and letting the visitors to bat first. While announcing the playing 11, to the shock of fans, Virat Kohli said that there are just two changes for the match from the previous one. He named Umesh Yadav and Shardul Thakur as the replacements for Ishant Sharma and Mohammed Shami. The exclusion of Ravichandran Ashwin came in as a surprise to fans as he was very much expected to represent the country in the decider. Hashtags, posts, tweets and memes are trending in social media platforms, condemning the decision of Indian Captain Virat Kohli and Coach Ravi Shastri.

When he played for Surrey in July before the Test series against England, the world class spinner picked 6 wickets by conceding just 27 runs. He bagged 7 wickets in total in the only county championship game he played and the venue was Oval in London where the fourth test between team India and England is being taken place currently.

With the venue helping spinners largely, Ravichandran Ashwin who was sitting in the bench for the past three matches, was expected to be included in the playing 11. However, it didn’t go that way as Virat Kohli has backed his 4 seamers template. It is also notable that England has 4 left handers and Ashwin is known for being a nightmare with his off spin to the lefties. The surface of Oval is known for bringing the spinners into the game as it gets progressed.

Many fans and cricket experts has been expressing their disagreement over the exclusion of a man who picked 413 test wickets so far. His numbers in SENA countries has been improving since 2018 as well. “I really hope it works but I am flabbergasted that India have gone in without Ashwin again.” said cricket expert and commentator Harsha Bhogle whereas Miachel vaughan of England came up with a tweet saying that it is a “Greatest Non-Selection” he have ever witnessed.

I really hope it works but I am flabbergasted that India have gone in without Ashwin again.

Kohli when asked about Ashwin: England has four left-handers…..and Jadeja is a good match-up against these batters. pic.twitter.com/3V0AXvARCY

I can't believe they left out Ashwin again, on England's most spin-friendly ground. This team is unbelievable. You pick your five best bowlers, @ashwinravi99 has to be the first or second name. Omitting him & @MdShami11 at the Oval is like a death-wish — as if you want to lose!

I'm going to stick my neck out and say that I may not agree with @imVkohli & the management's chosen XI, but I admire their courage & conviction.
The media and fans would have been far easier on them if they had picked Ashwin, regardless of the match result.

No Ashwin?!!! (Should save this as templated tweet now) #EngvsInd pic.twitter.com/lOwrskMQd6

We know nobody answers any questions these days, but if Indian think tank—such as it is—is determined to not play Ashwin ever, why take him on such a long tour? Team selections overseas looking as whimsical as the last one in S. Africa. That lost us the series.#INDvsEND

Shocking selection blunder for India to leave out Ashwin on an Oval pitch that’ll take spin from day 2 when India bowl. And Umesh in place of Shami? That’s daft. I’m afraid that describes Kohli, Shastri & the selectors as well #INDvENG

You really get to feel for R Ashwin#IndvsEng #Ashwin pic.twitter.com/GqkXqublgb

Impossible to see Ashwin's continued absence as anything other than a huge act of self-sabotage.

India may well win, they are really good after all, but it's just way too clever by half to leave out your 400-wicket, 5 century guy.

Ravichandran Ashwin remains unselected. Ashwin took 7-126 for Surrey against Somerset at the Oval earlier this summer, and was the leading wicket-taker in the India v England series earlier this year. #ENGvIND

Kohli is arrogant and jealous with R Ashwin.

Once again it's proved

Nasser – Why no Ashwin still ?

Of all the reasons he had to give for Ashwin not featuring (even when both Ishant and Shami are not playing), Kohli picked the "England has 4 left handers" line. Feels like he is trolling us all at this point. 😂 #ENGvIND

So Kohli has declared the World #2 bowler is useless against left handers.

When Ashwin becomes the captain (which will be soon) he should just drop Kohli if there is a solitary cloud in the sky. "He can't play swing, hence dropped"

That would be fitting.

Has there ever been a world number 2 bowler and number 4 all rounder consistently getting dropped like Ravichandran Ashwin?

Previous article“Cooku With Comali” Fame Ashwin Kumar Got Arrested ??
Next articleYouth Sent Obscene Pictures Of His Ex-Girlfriend To Her Current Boyfriend!! Case Filed Against 4