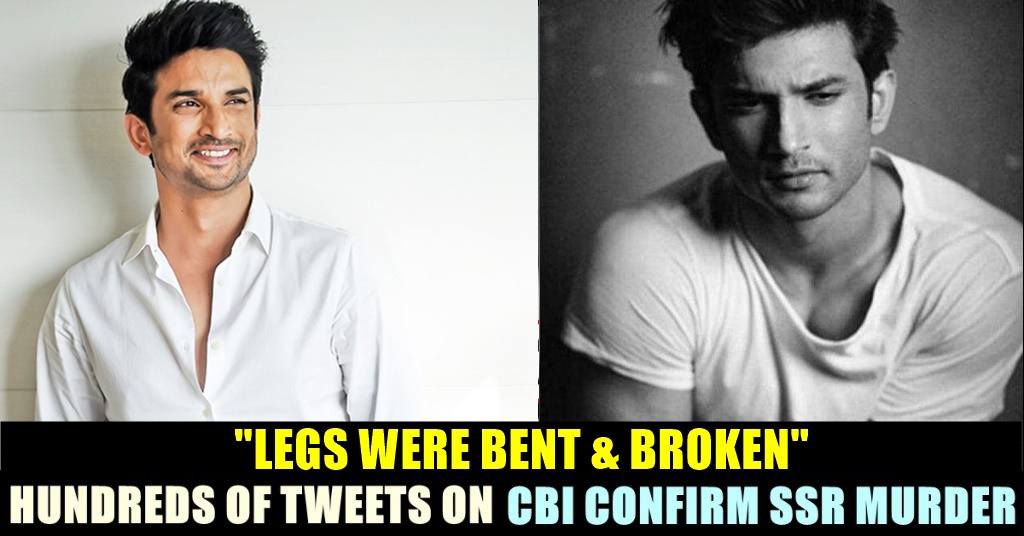 “CBI confirm SSR Murder” is trending in the micro blogging social media site with hundreds of fans demanding the officials to confirm the demise of the young actor as “Murder”. Netizens alleging that CBI is delaying to conclude it as a “Murder” despite of enough evidences.

After initial investigation, Sushant’s death was declared as a “Suicide”. However, fans and users of online platforms questioning about the non-existence of a suicide note of the actor, a mark in his neck and also about the needle holes in his body. They also questioned whether a shawl which was allegedly used by Sushanth, would have borne the entire body weight of the actor. “His leg looked broken and so many injuries were found in the body of him. His face looked paralyzed. His eyes were swollen” alleged netizens and questioned CBI why there are not concluding Sushanth’s death as a murder.

Sushant Rajput singh died by suicide on 14th of June 2020, at his home that is located in Bandra, Mumbai. The preliminary post mortem reports revealed asphyxiation by hanging as the cause of death. Sushant’s demise shocked the entire country as the actor looked very much promising as far as his career in cinema field is concerned.

Sushanth was 34 year old while dying and left the entire country in utter shock as he a had a brightest future in the Bollywood industry. Many fans blamed the existence of Nepotism in the Bollywood town for the demise of actor as well. Now, after more than a year, hundreds of tweets are flooding the feeds of social media platforms, demanding CBI to confirm the demise of Sushanth as “murder”

Check out some of the reactions that surfaced in Internet below : .

Why is CBI taking so long to solve this case?

Every evidence points towards the fact that Sushant was brutally murdered. What’s stopping CBI from confirming the same? Why cant CBI rule out all the other aspects? Please answer this & all the Qs that follow@PMOIndia @HMOIndia @DoPTGoI @DrJitendraSingh
CBI CONFIRM SSR MURDER

Morning Trend Activity 👇
CBI CONFIRM SSR MURDER
“The truth is always stronger in the end if people stand up and fight for it.”
-Helen Steele. pic.twitter.com/bL30n8l8hF

Don’t you know the meaning of Justice @RijijuOffice Ji as you are the LAW Minister of INDIA.

CBI CONFIRM SSR MURDER
Laws are like cobwebs, which may catch small flies, but let wasps and hornets break through.
― JONATHAN SWIFT. pic.twitter.com/nmsrL9BHYW

Girl Student Committed Suicide After Falling In Love With A “Prank” YouTuber!!
Video Recording Of A Teen Using “Swear Words” To His Teacher Irked Internet !!