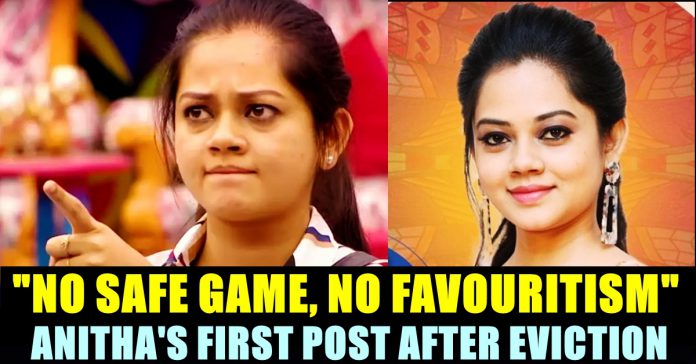 Anitha Sampath came up with an Instagram post sharing about the experience she had inside the Bigg Boss house and thanked her supporters for voting her all these days. The former news reader said that she needs nothing more than what she has earned now and added that she never supported anyone blindly inside the house. Her post garnered huge reception from the users of Instagram.

Anitha got officially evicted as the 10th contestant from the Bigg Boss house on the Sunday’s episode of the show. Her eviction came in as a shock to the viewers as contestants such as Aajeedh, Somashekar are still playing the game without getting evicted despite of doing nothing significantly in these 84 days.

“I initially thought that I would get evicted from the house within 2 weeks. Staying this longer in this house matters a lot to me and I wished to celebrate new year with my husband and family.” said Anitha and encouraged the working women to be believe in themselves. “I myself is a big example for you all. Don’t lose hope and your life will change one day” she provided courage to the women.

Now, she made her re-entry in social media with a long post sharing about her Bigg Boss journey. “What else do I need ? I have never been a sidekick to anyone and stayed true to myself in those 84 days. No safe game. No favouritism. No paid p.r pages. No abusive comments from my pages to other contestants and I am proud of that” Anitha’s post read.

“I feel proud for being part of some of the significant twists that took place inside the house. Thanks to those who voted for me. Everyone do have emotional feelings. You people will understand only if you enter the house as a participant. One can cheer the batsman to hit six by being inside the house but it is the batsman who knows about the hardship behind it.” Anitha’s post read.

She further thanked the neutral audience. “I saw your posts and comments. I was really happy and gained so much of confidence about my game.” Anitha said. This is me. I don’t immediately apologize to impress the audience. I don’t fake my laugh. I don’t know how to control my anger to escape from the eviction. I stayed true to myself.” Anitha said.

Replying to the abusers, Anitha said that they are just seeing 1 hour show and made it clear that it was extracted from 24 hours. “No one is perfect..
No one can be right all the time..” she said through her post.

Anitha Sampath, a news reader by profession is pretty much active in performing tasks and also in interacting with her fellow housemates. She had a rift with Suresh Chakravarthy in the first week over a comment he made about news readers. A statement she made on widows being a part of Hindu rituals was lauded by Kamal Haasan himself. She also caused the elimination of Samyuktha and questioned strongest contestants Balaji Murugadoss, Aari Arjunan, Rio raj during her stint.

Previous articleWarner’s Heart Winning Replies After Impersonating Kohli !!
Next article“India Are Going To Get Hammered In The Test Series” – Famous Cricketer Before 2nd Test !!

On Monday, 11 patients who were getting treatment after getting infected with COVID 19 virus in the ICU of Sri Venkateswara Ramnarain Ruia Government...

Abhishek Bachchan Replied A Man Who Trolled His Looks & Background !!

Bollywood actor Abhishek Bachchan has the habit of winning the hearts of his followers through his cheeky yet intelligent replies to trolls and criticisms....