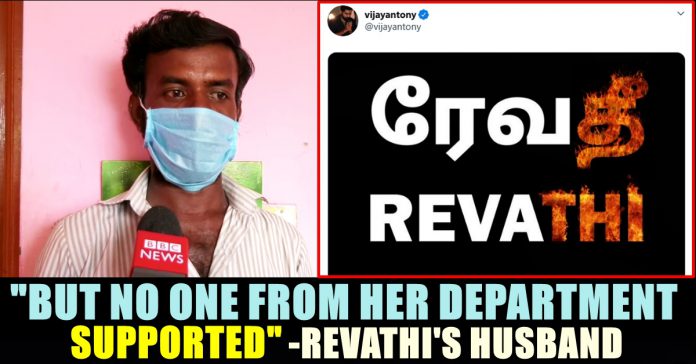 Revathi, head constable of Sathankulam police station, who had witnessed the custodial torture of the father and son duo at the station in Sathankulam town in Thoothukudi district, Tamilnadu, hasn’t received any support from her own colleagues, said her husband to the media. As soon as Revathy accepted to witness the custodial torture of Jayaraj and Fenix, she is receiving humongous support from the public.

“I told the magistrate about this issue thinking my name would not come out. But, it is not out everywhere. I need protection now. I am scared. I don’t how my family and I will be able to move around in this district.” Revathy told media over phone call.

When the other police officers of the station refused to cooperate with Magistrates who went to the station, Head constable Revathy who was present on the night of June 19 is the only Police official agreed to sign her witness statement only after the magistrates assured her protection.

Now, her husband, in an interaction with the media has said that his wife didn’t receive any kind of support from her colleagues from the police department. Santhosham, husband of Revathi has said that he feels happy and proud about wife who stands by the justice. He wanted no such issue to take place in the future. Santhosham further said that his wife contacted him during the night and informed him about the torture Jayaraj and Fenix went through by the police officials.

“She often called me and informed me about what happened in the station while being there. We didn’t meet the next day. When we met on the evening, she said that they(Jayaraj and Fenix) were again admitted in hospital. She also said that they were beaten till the wee hours of that night. No one from her department called and expressed their support still.” said Santhosham.

Revathy didn’t receive any threats or calls from her senior officials till now. “But we never know what will happen in the future. Since, I am in the departement, there should be any problem for me. I thought about being true to my work and so I told the magistrate about whatever happened on that day” Revathy said in her earlier interview.

Five police officers linked to Sathankulam lockup murder have been arrested under Section 302 of Indian Penal Code on Thursday. Sub-inspector Raghu Ganesh was the first one to get arrested regarding the case. The three others which includes sub inspector Bala Krishnan and constables Murugan and Muthuraj. Later, the CB CID included the name of Inspector Sridhar and arrested him near Kovilpatti according to reports.

Previous articleTik Tok Made Its Come Back In Style !!
Next articleWoman Filmed, Blackmailed & Killed By DMK Member ??

Just as expected, the diya lighting even conducted by our honourable Prime minister Modi, went wrong to an extent that people started bursting crackers...

Shruthi Nakkhul replied to her Instagram followers who advised her on how to take care of her baby after sharing a picture of herself...

Dhee-Arivu's independent single "Enjoy Enjaami" became a massive success among the music lovers across the world. The video song which is trending in youtube...

South Indian actress Rashmika Mandanna, in her recent press meet with the reporters, opened on getting banned by Kannada film industry due to the...