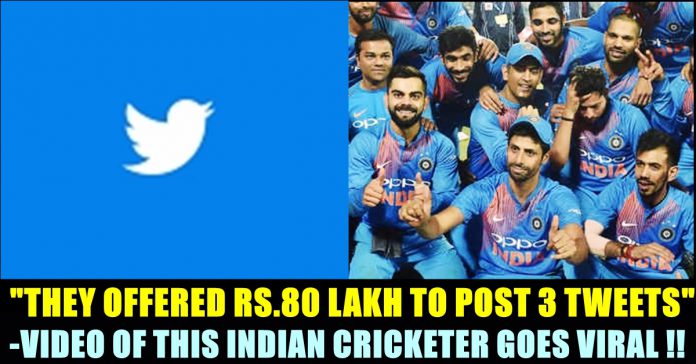 A three year old video of former Indian pacer Ashish Nehra revealing that he turned down an offer of Rs. 80 Lakh to upload three tweets per month is trending in Twitter now as a bunch of cricketers uploaded tweets against Farmers Protest on Wednesday evening. In the interaction with Gaurav Kapoor, Nehra says that he turned down the offer and added that he always do what his hearts, not what others order.

Since the evening of Wednesday, entire cricketing fraternity coming up with tweets opining about “India being together” and raised their voices against external forces involving in the politics of India. Starting from Sachin Tendulkar to current Indian captain Virat Kohli, almost all the top tier cricketers uploaded tweets advising their followers to be together.

As soon as these tweets grabbed the headlines across the world, Indian popular sports personalities starting from Sachin Tendulkar to former Indian all rounder Suresh Raina, many cricketers uploaded tweets indicating that Indians should decide for India. Apart from Sachin, Virat, Raina, some of the big names such as Rohit Sharma, Ajinkya rahane, Hardik Pandya, Anil Kumble, Ravi Shahsthri came up with tweets advising their followers to be united.

The above mentioned cricketers are being subjected to massive trolls and criticisms in social media platforms. Here’s some of the reactions below :

The harder they try, the worse it gets. It’s a PR disaster.

A single #Rihanna has woken up Bollywood and a few Cricketers !?#FarmersProstest

Remember this…today's a good day to know which celebs should still be loved and whom should be forgotten.

Meanwhile, a three year old video of popular cricketer Asish Nehra turning down an offer of Rs.80 lakh a year for three tweets per month is doing rounds in social media platforms. “This guy came to me and said ‘Do 3 tweets per month and we will pay you Rs. 80 lakh for the year. But we will tweet you what to tweet’. I tell them ‘I don’t listen to anyone, no one can tell me what to do. I will do what my heart tells me to do. Get lost now.’ I f someone tells me to walk naked from here to there and they will give me 2 crore, that doesn’t mean I’m not going to walk naked.” said Nehra to Gaurav.

When Nehra Ji was asked to do paid tweets 😂😂😂 pic.twitter.com/dslRe4SytH

Thanks fr the video man. Now it will b easy to convince my friends and relatives that Modi ji paid the stars for the tweets. 🙏

80 lakh for three tweets for a month – Ashish Nehra .Understand how much money other celebrities may have got for yesterdays tweet .

Previous article“Dhoni, The Only Not Out Batsman At The Crease” – Fans
Next articleBalaji Uploaded His First Insta Post After His Father’s Demise !! BB Contestants Mourned

Tamil Actress Swathi Replied To Those Who Commented On Her Looks !!

Swathi reddy rose to fame among through her debut film "Subramaniyapuram". Her cute looks and adorable expressions with that half saree in "Kangal Irandal"...