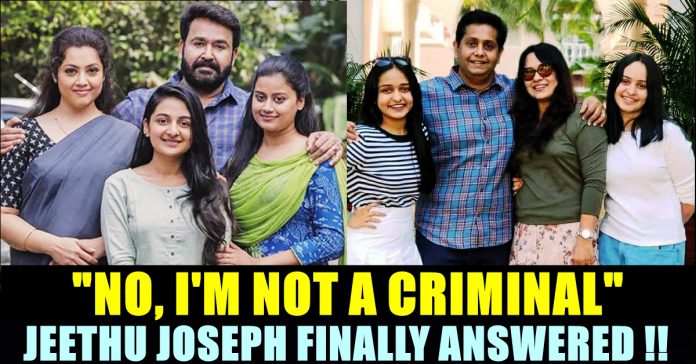 After the success of the mystery thriller Drishyam 2, director Jeethu Joseph appeared for an interaction with film journalist Baradwaj Rangan. Throughout the 51 minute long conversation, the filmmaker talked about many aspects of the film including how he got the idea of burying the body beneath the police station in the climax of Drishyam one and on how he got the idea of making a sequel for it. Interestingly, in a way of replying to a popular meme which compares the lead character of the film with the filmmaker, the latter said that he is not a criminal and opened about his family background to Baradwaj Rangan.

Along with the fans, many celebrities from the film industry are also appreciating the filmmaker and Mohan lal for the way they made the film. As a part of the celebration, many fans made memes comparing George kutty & family with Jeethu Joseph & family by sharing a similar pictures of both of the families.

“Request the Indian government to look into Jeethu Joseph’s past. Get a strong feeling he must have been a criminal mastermind before he made his foray into movies” wrote a popular parody twitter handle Srini mama in a humorous way.

Those who have watched the film will get a little shock when seeing this Picture of #JeethuJoseph 's family Picture 🤣#Drishyam2 pic.twitter.com/eiDymLCh21

Answering to him, Jeethu politely said “No” and revealed that he was just a rubber planter before becoming a filmmaker. “No sir, before becoming a filmmaker, I was just a rubber planter. I am coming from an agriculture family. My father was politician. He was an MLA and I am coming from a village background. I have three brothers, one sister and I am the only person working in the industry. So I have no connection” the filmmaker said while answering to the host.

Further Jeethu revealed how his family members reacted when he opened to them about the idea of Drishyam 2. They wanted him not to ruin his name by doing the script. However, after reading the script, one of his daughters who is aspiring to become a filmmaker said that Drishyam 2 will become a good cinema. After that, Jeethu said that he gave the script to his assistant directors and sorted out the flaws before sending it to Mohan Lal. The filmmaker also said that he made a deep research before making the film by talking with his doctor, police friends.