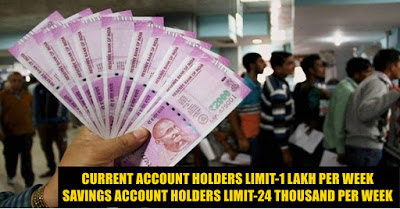 The Reserve Bank of India on Monday announced that limits placed on cash withdrawals from ATMs stand withdrawn from Feb 1. However, the weekly withdrawal limit of Rs 24,000 will continue. The central bank also said that all limits on current account and overdraft accounts stand withdrawn with immediate effect. The RBI, however, allowed the banks to maintain their discretion on own operating limits.

“On a review of the pace of remonetisation, it has been decided to partially restore status quo ante,” RBI said adding, cash withdrawal limit from ATMs stands withdrawn from February 1, 2017.

After demonetisation, the government had placed limits on cash withdrawal in wake of a cash crunch in the country. The RBI had progressively increased the cash withdrawal limits at ATMs from Rs2,000 on 8 November to Rs10,000 per card, per day as of 16 January.

The central bank and the election commission are locked in a face-off over the relaxation of cash withdrawal limits for candidates fighting the upcoming assembly elections in five states. The poll panel wants the limits to go but the RBI has refused any leeway.