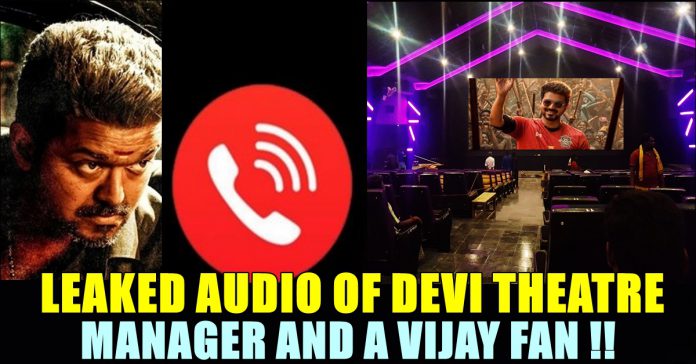 Meanwhile a news surfaced yesterday, saying that the newly released Vijay-starrer has no people occupancy in a top theatre in Chennai. This created huge outrage in the social media platforms as the film was expected to have a long run.

Much to the shock of everyone, the matinee and night shows of Bigil at Devi Paradise (a popular theatre in Chennai) were cancelled because of the poor turnout of people. While trade analysts are posting the box office records of Bigil, this news came as an absolute shocker to everyone.

On October 31, Devi Paradise theatre didn’t not see a lot of crowd for Bigil. Ideally, a film is screened in the theatre if there are 30 or more people to watch it. However, the audience turnout for the film was less than 30 in Devi Paradise, so they were forced to cancel the show.

Now, an audio conversation of the theatre manager with a fan has been released. In the conversation, we can hear the theatre manager saying that Devi Paradise has a capacity of 2000 seats. Due to rain and the effect of people watching the movie in first 5 days, made him to cancel the show and suggested the audience to watch it in Devi.

Recently, box office trackers took to Twitter to reveal that Bigil has raked in over Rs 100 crore in Tamil Nadu alone at the end of one week of its theatrical run. The film is still continuing its dream run and is expected to run in theatres without major competition for at least another week.

What do you think on this audio conversation between the theatre manager and the fan ?? Comment your views !!

Previous articleFan Girl Slammed Harish Kalyan For Blocking In Instagram !! Here’s How He Responded !!
Next articleNo More Goondas Act On Pollachi Rape Accused !! What Is The Reason ??

Ravindra Jadeja is one of the most prominent all rounders of Indian cricket team. His fight in the semi finals of 2019's world cup...

Video Of Chennai Cop Getting Thrashed By Public For Misbehaving With A Woman Goes Viral !!

A three days old video of police constable named Rajiv getting thrashed by public for misbehaving with woman goes viral now. He got arrested...

On Saturday, Tamil nadu Chief Minister Edappadi K Pazhaniswamy has announced that the ticket prices to travel in Chennai metro train will be reduced....