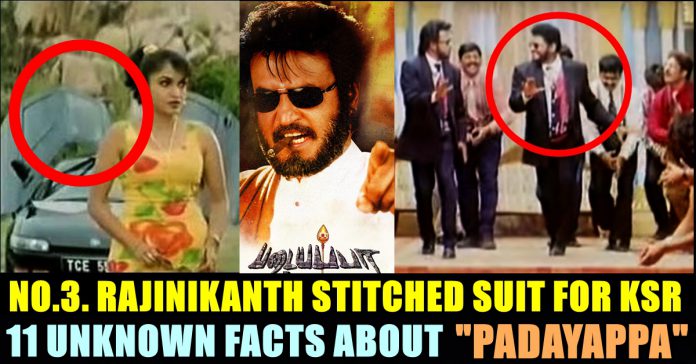 Today, On April 11 2020, the evergreen blockbuster movie “Padayappa” celebrating its 21st anniversary and social media knows it. Several hashtags are trending in Twitter to celebrate the film’s 21st year as it is one of the most successful film in the history of Tamil cinema. We can part Tamil cinema as before Padayappa and after Padayappa. The film rewrote the meaning of “mass” in the history of Tamil cinema and also became the first film to collect 50 crores in Tamil film industry, according to sources. The film had Superstar Rajinikanth and Ramya Krishnan in the prominent roles.

Directed by K. S. Ravikumar, the film also featured Sivaji Ganesan, Soundarya in the lead roles with Abbas, Lakshmi, Radha Ravi and Nassar in supporting roles. The soundtrack album and background score were composed by A. R. Rahman.

On this special das, let us look at some of the unknown facts about the film :

Padayappa- Neelambari is not Rajinikanth-Jayalalithaa :

We are all aware of the fact that Rajinikanth had a clash with Jayalalitha during 90’s and many believed that the film was made to depict the clash. However, the makers officially revealed that the character of Neelambari is not inspired from the former chief minister but from the role Nandini in Ponniyin Selvan.

Ramya Krishnan was not the First Choice for “Neelambari” :

Actress Meena who paired with Rajinikanth in blockbuster “Muthu” was initially chosen to play the vital role of “Neelambari”. K.S Ravikumar who saw her performance in a shooting spot of some other film, couldn’t relate her with a cruel negative role. He immediately called Rajinikanth and informed about it. They even considered actress Nagma to do the role. However, Ramya Krishnan who was a dear friend of director K.S Ravikumar since his early days got finalized.

We all know that K.S Ravikumar would present a glimpse of himself as cameo appearance in his films. But with Padayappa, due to the hectic schedule, the filmmaker didn’t think of a cameo for himself. Without the director’s knowledge, it was Rajinikanth who ordered the costume designer to stitch a similar costume of himself to make K.S Ravikumar movie his legs a bit in “Oh Oh Oh Oh Kikku Eruthe” song. Though he denied to wear the dress, Rajinikanth compelled Ravikumar to wear it and to dance with him in the song. In an interview, K.S Ravikumar said that he got surprised on seeing this gesture from the Superstar actor.

The role played by actress Soundharya would have played by Simran and actress Shalini Ajith was supposed to do the role of actress Sithara who acted as Rajinikanth sister in the movie.

It was Rajinikanth who came up with this Anti-heroine subject. The core idea was brought up by the Superstar actor who directed few films in his career and was developed by K.S Ravikumar. It is also notable that rajinikanth approached two more directors to do a movie based on Anti heroine line and finalized K.S Ravikumar.

Many of the punch dialogues in the film were written by the Super star actor himself. The most popular “Enn Vazhi Thani Vazhi” which is being used by him even today to address his political career was written by Rajinikanth himself. “Poda Antha Aandavane Namma Pakkam Irukkaan” and “Athigama Aasa Padra Aambalayum, Athigama Kova Padra Pombalayum Nalla Vazhnthatha Sarithirame Illa” are also having Rajinikanth’s contribution.

In a recent interaction with director Chithra Lakshmanan K.S ravikumar revealed that the film initially had 22 reels and they thought of providing 2 intervals for the film. When the film was screened to Kamal Haasan, the “Nayagan” actor insisted on editing the film more. Upon his advice, the film was trimmed from 22 to 14 reels with one interval.

The film went of floors by having veteran filmmaker K.Balachander in the shooting spot. He clapped for the first shot to start the film. Former Chief Minister Mu. Karunanithi sent a personal letter to Rajinikanth in a way of wishing him the best for the film.

Actual owner of the car used by Neelambari in the film belonged to director K.S Ravikumar. The usage of the iconic Toyota Sera hatchback in the shot was done due to the insistence of Rajinikanth.

Renowned music director Harris Jayaraj worked as a keyboard player for A.R Rahman at that time. He also worked along with the music maestro in the re recording session. When A.R Rahman left the iconic “Oonjal Scene” empty due to lack of time, it was Harris who rearranged the scene by having the title track as background music. Rahman approved his improvisation and the scene is still considered as one of the best “Mass” scenes in the history of Tamil cinema.

The song “Minsara Khanna” had two versions. Apart from the released version, singer Hariharan also lent his voice for the song. While choosing the final, both Rajinikanth and K.S Ravikumar went with Srinivas’s.

Now comment your favourite moment in the movie on this special day !!

Previous articleVishnu Vishal Worried For Not Being A Cricketer !! Ashwin Consoled
Next articleNot Corona Outbreak, This Is The Biggest Problem In Releasing These Movies !!

Prime minister Narendra Modi addressed the nation on Tuesday night 8 PM and confirmed that there will be a 4th phase of the lockdown...