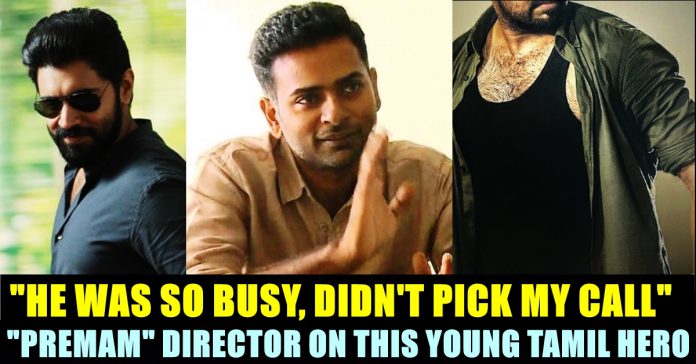 On the 5th year anniversary of “Premam”, Alphonse Putharen participated in an interaction with Baradwaj Rangan of Film companion South. In the 1 hour long interaction, Alphonse shared many things about the story behind how “Premam” was made, about his debut film “Neram” and about his future projects. Alphonse Putharen is considered as one of the important aspect among the new age filmmakers in Indian film industry. His film “Premam” got highly appreciated by vast number of audience and is being remade in several languages as it collected huge money at the box office. Despite of being a straight Malayalam film, “Premam” garnered a special attention among Tamilnadu audience.

Alphonse Putharen started his career as an editor in “Naalaya Iyakkunar” short film competition which streamed in Kalaignar TV. He is one of the important filmmakers who made their entry into filmmaking during early 2010s along with Karthik Subbaraj, Nalan Kumarasamy and others. In this interaction Alphonse revealed whom he wanted as a hero for his first film “Neram” which is a sleeper hit during its release time. A song “Kaathal Ennulle” which took place in the film acted as a trendsetter in tamil film industry and provided a new dimension on how to portray a heroine. The montage shots of this song gained popularity for actress Nazriya who went on to pair with top heroes of tamil film industry such as Dhanush, Arya etc.

Now, in this interaction, while talking about casting Nivin Pauly in the lead role for “Neram”, Alphonse said that Nivin was not his first choice for the film though he worked with him in short films earlier. The filmmaker revealed that he wanted actor Jai in the lead role as he liked his performance in films like Chennai 28 and Engeyum Eppothum. He went on to reveal why he couldn’t cast him in the role “Mathew” played by Nivin.

“Nivin was the producer of “Neram” short film in 2009. He gave Rs.3,000 as his contribution and became one of the producer who wanted me to become a director. He didn’t even act in it. I worked with him in “Eli” short film and we worked together for a music video. For “Neram” Nivin wasn’t the first choice. I tried actor Jai because I liked his acting in Chennai 28 and Engeyum Eppothum. At that time he was so busy, he didn’t pick my call, I went to his home and tried to reach him two, three months and my producer lost interest. Then we fixed Vaibhav. He was really interested but he wanted the film to be made in Tamil and Telugu simultaneously instead of Tamil and Malayalam. That didn’t work. Finally my producer saw the music video and asked why I couldn’t cast the duo themselves in the full length version of “Neram”. As I know his positives and negatives, it became easy for me to work with Nivin” Alphonse said in the interaction.

Watch the interaction below from 31 st minute :

The filmmaker also added about many things including his upcoming projects in his interaction with Barad. Comment your views on Jai who is now stumbling to get a break in film industry, missing the golden opportunity of Alphonse !!