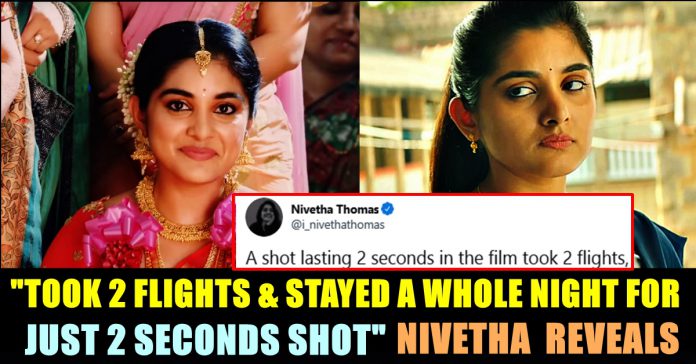 Nivetha Thomas is one of the emerging actress of South Indian film industry. Apart from Sridevi, Sri priya, Simran and Jyothika, no many actresses shared screen space with both the legends of Indian cinema. New age lead ladies such as Nayanthara and Trisha couldn’t pair up with both of them. But actress Nivetha Thomas who initially rose to fame among the TV audience of Tamilnadu through “My Dear Bhootham” mystery serial, has achieved the milestone of acting with both. It is also notable that she played the role of actor Vijay’s sister in the movie “Jilla”.

Nivetha Thomas who had more screen space than lead actress Nayanthara, impressed audience with her performance. Now as the film is running successfully in theatres, Nivetha has revealed an interesting fact that took place behind the camera. In the song “Dumm Dumm”, Nivetha Thomas would appear in the screen for a glance as an imagination of Superstar Rajinikanth as a bride in the marriage he visits. As Aadhithya would wish to see his daughter getting married soon, he would imagine his daughter as a bride for a second.

Now, in her official social media account, Nivetha Thomas has revealed about the effort she put to appear in this shot which lasts only 2 seconds. The actress who enjoys more than 15 lakh followers in twitter said that she took 2 flights, a whole day’s shoot and a whole night’s stay to work. The actress revealed this fact to let her followers about the process of filmmaking.

“A shot lasting 2 seconds in the film took 2 flights, a day’s shoot and a night’s stay to work. Film making is a tedious process. Cheer the feeling it creates! Be kind 🙂 Every word you say spreads & it definitely, matters. This particular setup was from #Darbar” Nivetha wrote in her post by uploading a picture of herself during the shoot of the soong.

A shot lasting 2 seconds in the film took 2 flights, a day’s shoot and a night’s stay to work.

Film making is a tedious process.
Cheer the feeling it creates!
Be kind 🙂
Every word you say spreads & it definitely, matters.

This particular setup was from #Darbar pic.twitter.com/oFbIAiOwac

Check out the full song Nivetha is talking about here :

Nivetha Thomas made her debut film with the 2008 Malayalam film Veruthe Oru Bharya, for which she won the Kerala State Film Award for Best Child Artist. In the same year she made her Tamil debut with Kuruvi. She has since starred in more than a dozen movies, making her Telugu debut in 2016 with Gentleman.

“Remember How Much You Demanded To Review My Film ?” Actor Questioned Blue satta

We have seen many heroines coming up with allegations against men who misbehaved with them during the process of filmmaking. The latest one to...