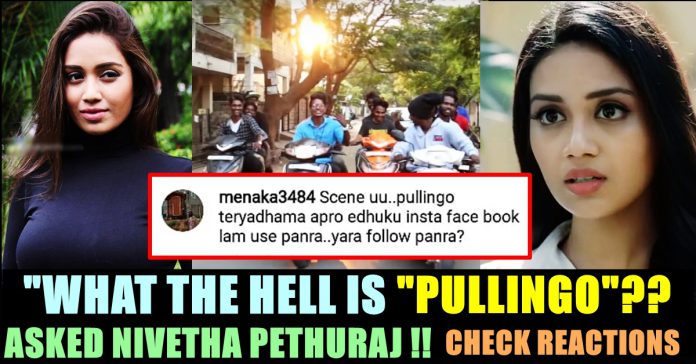 Nivetha Pethuraj is one of the many emerging actresses who are very much active in social media platforms. The actress who is known for appearing in “Oru Naal Koothu” film has a separate fan base in Instagram where she lets her followers know about her daily routines.

Having more than 15 lakh followers in Instagram, Nivetha in one her recent post asked her followers what actually “Pullingo” means. In her first post, Nivetha shared a selfie picture of herself with a caption saying “Pullingo”.

In her second post, Nivetha asked her followers what it actually means as she was called by that term by her brother while taking selfie. “Ok.. my brother called me pulingo while I was taking selfies.. seriously someone explain what the hell is pulingo?” read the caption of Nivetha for her second post.

Ok.. my brother called me pulingo while I was taking selfies.. seriously someone explain what the hell is pulingo?

“Pullingo” is a trending term in Chennai to refer the boys who tries to portray themselves as one of a kind. The term became popular once the song “Gumbalaga Suthuvom” which was made by Independent Gana Artist Stephen went viral. Since then many memes and videos based on “Pullingo” started surfacing in Internet.

To this post of Nivetha, many of her followers commented and one of them didn’t believe that Nivetha is not aware of what “Pullingo” means. To that comment, the actress said that she like that song.

Many tried to explain Nivetha what pullingo means and few got irritated by the actress’s doubt and asked whether she is from abroad to express their frustration. Check out some of their reactions :

Nivetha Pethuraj was born in Kovilpatti and left for Dubai at a very early age along with her parents. She did her early schooling in Thoothukudi[4] and then lived in Dubai for over 20 years. In 2015, she won the Miss India UAE pageant.

Nivetha made her acting debut in the Tamil drama, Oru Naal Koothu (2016). Her subsequent releases include Podhuvaga Emmanasu Thangam which had Udhayanithi stalin in the lead. She also acted in the space fiction thriller Tik Tik Tik, which earned her critical acclaim.

In 2019, she signed major Tamil movie which was titled as “Sanga Tamizhan” starring Vijay Sethupathi directed by Vijay Chander. The film is expected to hit the screens on November.

Previous articleCheran’s Open Statement About Kavin In BIGG BOSS HOUSE !! WATCH !!
Next articleBank Refused To Give His Money In The Account !! Man Died Of Heart Attack !!

Friends is a 2001 Tamil romantic comedy drama film, directed by Siddique and produced by Appachan. The film features Vijay, Suriya and Ramesh Khanna,...