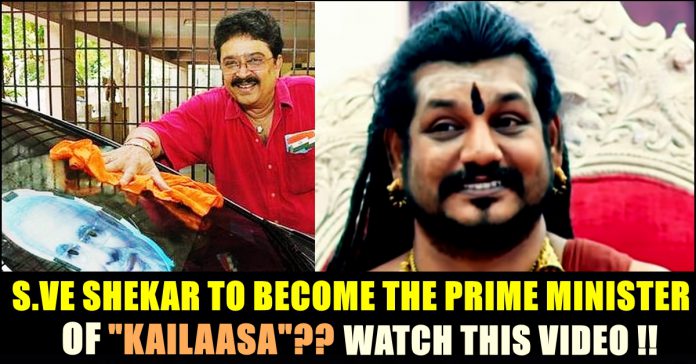 One of the Tamilnadu representative of BJP political party, S.Ve Shekar proposed self proclaimed Godman Nithyanandha to become the prime minister of his new country Kailaasa. The controversial figure is wanted by Police in a case of kidnapping and wrongful confinement of children at his Ahmedabad ashram. A recent video of the man claiming that no one can touch had gone viral in social media.

Nithyananda who absconded, has founded a new nation of his own and named it as ‘Kailaasa’. And it has its own “passport”, according to reports. He has also launched a website of the new “nation”, describing it as the greatest Hindu nation on earth. According to unconfirmed reports, Nithyananda has bought an island in Ecuador in central Latin America and has started calling it an independent, new nation.

The government cancelled his passport and rejected his application for a fresh one. Foreign Ministry spokesperson Raveesh Kumar also said that it has sensitised all its missions and posts abroad about locating Nithyananda. Asked about reports that Nithyananda has founded his own country, Mr Kumar said, “Setting up a website is different from setting up a nation.”

Now the Karnataka police has given time till 18th december to submit reports regarding the absconding of Nithyanandha. Now in a recent video, S.Ve Shekar has supported Nithyanandha and asked people to stay away from him if they doesn’t like his stand.

The politician even asked people to send him funds to his organistions if they like to. S. Ve. Shekhar is a Tamil playwright and film actor. In 2006, he made an entry into politics by contesting and winning the Legislative Assembly Elections as an AIADMK candidate from Mylapore. He was expelled from AIADMK on 30 July 2009. He later joined the Indian National Congress. Later he joined the BJP. In February 2009 he started Brahmins Association under the banner FEBAS which has not received any support from the already existing association THAMBRAAS.

Recently he caught in controversy for passing unnecessary obscene comments on female journalists. Despite court ordered police to arrest him, he managed to roam outside at that time. What do you think on this video of S.Ve Shekar ?? Comment your views below !!

Rift Between Samantha & Pooja Ended ?? Check Out The Reactions Of Fans

After Samantha shook her legs for the recently released "Arabic Kuthu" at airport and tagged Pooja Hegde in her Instagramm video, fans who are...

Tamil actress Reshmi menon who is known among the audience for acting in films such as "Inithu Inithu", "Kirumi", "Urumeen", came up with a...