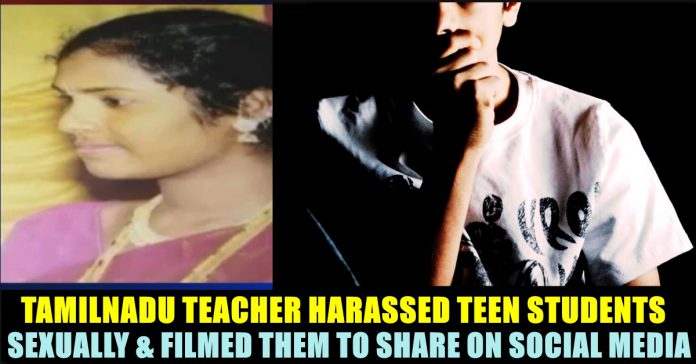 A 30-year-old woman was arrested under POCSO act on the charges of sexual harassment and allegedly used her students for pornographic purposes at Arni in Tiruvannamalai district. From 2015 – 2017 the teacher involved in such crime which came to light due to her husband’s complaint with evidence. So far the Police has the evidence of the teacher harassing two boys.

After a complaint was filed by Tiruvannamalai District Child Protection Unit (DCPU), Arni All Women’s Police arrested U Nithya (30), a government school teacher, under Section 10 (aggravated sexual assault) and Section 14 (punishment for using child for pornographic purposes) of Protection of Children from Sexual Offences (POCSO) Act on Wednesday, according to police sources.

Nithya was married to Umesh Kumar, and the couple was residing at Kamaraj Nagar in Arni of Tiruvannamalai district. Nithya, who was working as an English teacher at Paiyur government high school, had sexually harassed her students to be intimate with them and used them for pornographic purposes. She, on the pretext of taking tuition classes, had gone to a student house and was in intimate relationships.

The incident came to light after her husband, Umesh Kumar – a government school teacher, found intimate pictures and pornographic materials of the student on her mobile phone. Umesh confronted her wife, Nithya, and asked her to stay away from such behaviour, the police sources said. She reportedly kept those photos to share in social media.

“He confronted her and it led to a major fight between the couple,” say police. “Despite her husband’s warnings, Nitya was stubborn and continued her physical relationship with the minor, following which he filed a petition with the District Collector’s office.” Based on instructions from the Collector, the Tiruvannamalai District Child Protection Unit conducted an inquiry. The suspect is said to have confessed to the crime. She was arrested by Arni all-women police station officials on Thursday.

Police suspect the woman could have assaulted four or five more minor boys. They are investigating for further information.

After the revelation, the couple had misunderstandings and quarrels. But, Nithya continued to indulge in misconduct, and when Umesh intervened she became rude and acted curtly. Frustrated over the issue, Umesh submitted a petition to district collector after his complaint was rejected by Arni all women police last year.

Based on the instructions from the collector, the District Social Welfare Officials (DSWO) conducted an inquiry, during which Nithya confessed to the crime. The DCPU filed a complaint with the police in January, and thus Nithya was arrested under POCSO, the police sources added.

Nitya’s husband says he tried to lodge a police complaint last year, but was turned down by cops saying only DCPO or victim’s parents could do so.  However, POCSO Act allows anyone to file a complaint. He then petitioned the Collector who asked DCPU to investigate.

Previous articleJUST IN : Gautham Menon Is Going To Be A Part Of Arjun Reddy Remake “Adhithya Varma” !! Check Out How !!
Next article“Indian Mia Khalifa” Netizens Compared!! Check This Young Heroine’s Reply!

Siddharth’s Fitting Reply To A Woman Who Termed Him As A “School Drop Out” !!

For posting tweets against the arrest of Disha Ravi, a climate activist, a woman named "Karuna Gopal" asked who he is and termed him...

Hansika Replied To Fan Who Asked For Her Whatsapp Number !! WATCH

Hansika Motwani who is very much busy in shooting for her 50th film Maha, conducted a chat session with her Instagram followers in between...

During the promotions for his upcoming film "Liger", young and emerging hero Vijay Devarakonda who is being considered as one of the bankable stars...